A normal painting is made in a single piece. But at times, when the artists want to communicate more than a single scene, they divide the painting into different sections, but which are joined to each other. Such a painting, where the artwork is divided into many sections is called a Polyptych. And, in cases, when there are three sections in a painting, it is called a Triptych. 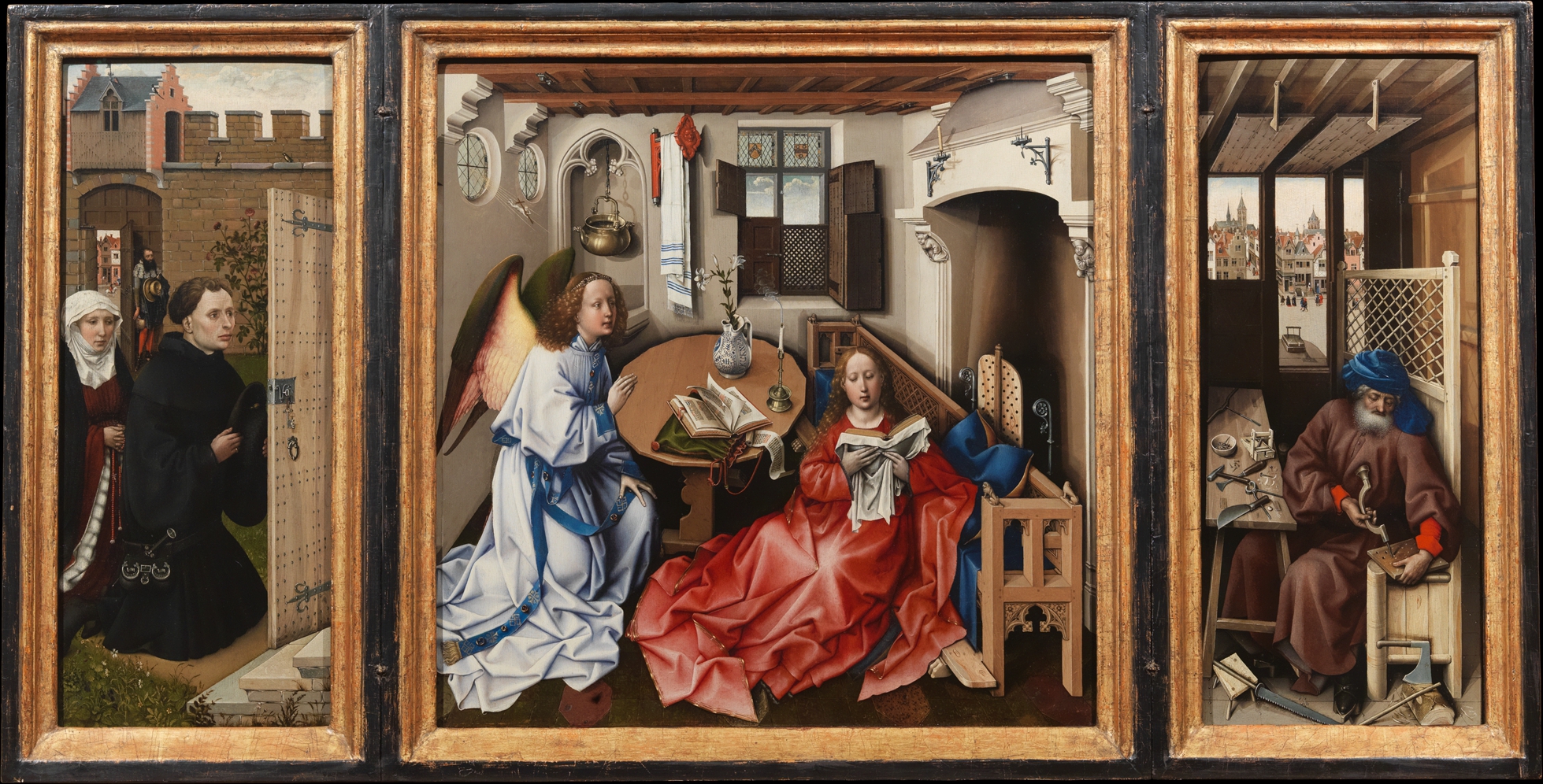 Mérode Altarpiece (or Annunciation Triptych), by Robert Campin and workshop (The Cloisters, in New York City)

The word has its origin in the Greek language. The root word is ‘triptukhon’, which in Greek means, three-fold. So, a Triptych is a panel painting, which has been divided into three separate sections or three separate carved panels, but which are joined or hinged together.

Though it is very closely related to art, in general terms, a triptych is used to denote anything which has three parts, particularly, if they are a part of the same story and integrates into a single story. This type of artwork is very commonly used in pendant jewellery.

When it comes to photography as well, a triptych is a common art style, especially in modern commercial art. In this style, the photographs are joined together, with a border between the three. These three sections may be part of the one larger image or three different variants of the same theme.

Triptych art is a variant of Polyptych. In a polyptych, artwork may be divided into several sections, all joined together. When the number of sections in an artwork is limited to three, then it is called a Triptych.

The triptych form of paintings has been in use since the Gothic period. This Christian art was very popular in Europe and many other places – from Byzantine churches in the east to the Celtic churches in the west. Most altarpieces in churches and cathedrals were actually in triptych form. During the Byzantine period, along with other relics such as icons, triptychs were also used for private devotional use. Since then, this art style has migrated and been used in other religions, including Islam and Buddhism.

The famous cathedral altarpiece triptychs include the Llandaff Cathedral and Notre Dame de Paris. The Cathedral of Our Lady in Antwerp, Belgium, by Rubens also contains two examples of a triptych.

The form is echoed by the structure of many ecclesiastical stained glass windows.

Many painters from the Renaissance age, such as Hans Memling and Hieronymus Bosch have used this art form. Many sculptors also have used it.

A triptych is a series of three paintings intended to be displayed together. Derived from the Greek adjective tri, i.e. "three" and ptysso, i.e. "to fold" or ptyx, such artworks may either be divided into three sections or consist of three carved panels that are hinged together and can be folded shut or displayed open. Triptychs were originally used as an altar-piece in churches. Traditionally two of the panels were attached to the central one by hinges and folded over it, to show two different paintings on the back. In contemporary times, it may take the form of panel paintings, digital art or photography divided into three, distinct sections. Another application of the triptych involves its use as a decor element in interior design spaces. Famous artists whose work features triptychs include Francis Bacon (22 January 1561- 9 April 1626), who painted more than 28 known triptychs between the period of 1944-1988, Max Beckmann (February 12, 1884 - December 28, 1950) and Hieronymus Bosch (c. 1450 - 9 August 1516).