When you see a picture of red roses growing in a garden, your eyes probably see the roses, its petals and the birds moving around. But your mind starts thinking about feelings of love and romance. This is because, over some time, roses have come to be known as a mean of expressing love for someone. Or in a way, we can say that red roses have come to symbolize love. This art style of using an object or a word to represent an abstract idea is called Symbolism.

Artists may use colours, animals, any action, person, place, word, or object to create some other abstract feeling symbolically. 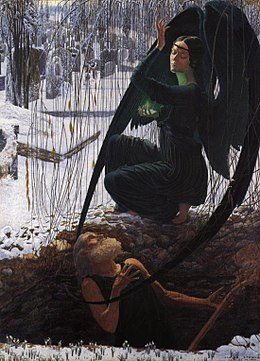 When it comes to language or even art, one object, concept, or word is not limited to a single meaning. The English language has an exhaustive list of symbols, which is used to communicate the desired meaning, without saying so openly. The meaning and significance of these symbols are well known and well accepted by masses. So, when an artist wants to communicate some feeling or emotions, there are two ways of expressing it. The first way is to say it directly, but then it makes the art very simple. The other way is to hint at that same feeling through the use of symbols. For example, the use of colours. The colour black is used to symbolize sorrow, while white stand for purity.

These symbols are used indirectly to communicate the desired expression, without saying so openly. This art movement is termed Symbolism.

Symbolism is an art movement that started in the second half of the 19th century. In literature, it all started in the year 1857, when Charles Baudelaire's published his famous work ‘Les Fleurs du mal’, where he made extensive use of symbolism. Baudelaire, who translated the great works of Edgar Allan Poe into the French language, was a great influence on Symbolism and this inspired many stock tropes and images.

However, the term "symbolist" was coined by the famous art critic Jean Moréas, who invented the term to distinguish the Symbolists from the related Decadents of literature and art. Though closely related to literature, symbolism in art was seen as being related to the gothic component of Romanticism and Impressionism.

This art movement which originated in poetry and other arts in France, Russia and Belgium attempted to represent the absolute truths symbolically through metaphorical images and language. A new generation of artists emerged on the scene, which did not have a common goal, but they were influenced by a particular style. These artists wanted to evoke certain emotions among their audiences through the use of colours, lines and forms. Though this was not a very radical shift, yet it was seen as a move towards abstraction, which is in stark contrast to Naturalism and Realism.

Use of Symbolism in past:

Symbols have been used by even primitive man in their cave paintings. Though these are bit complex. After this, the ancient Greek theatre also made us of various symbolic props to communicate some abstract idea. These props included even phallic objects to symbolize Dionysus, the god of fertility.

In literature, authors have long favoured the use of symbols among a wide range of literary devices. Many great writers and authors like William Shakespeare, Edgar Allen Poe and William Blake among others have used symbolism to create the desired effect in their work.

With changing times, literature has evolved a great deal, with the subject matter it covers. However, what has not changed is the use of symbols and their definition. For ages, Symbolism is defined as a concept of a word or object representing something beyond its literal meaning. Throughout history, several poets, authors, lyricists, play writers, and painters have used certain types of symbolism in their art. Some of the major types of symbolism used are listed below:

Religious symbolism: This is perhaps the most consistent and most accepted use of Symbolism. This is because; this use of symbolism has been approved by religious authorities, who have controlled the human society for quite a long time. The major use of religious symbolism can be seen in great works like Paradise Lost by John Milton, and The Brothers Karamazov by the Russian author Fyodor Dostoevsky.

Emotional symbolism: Many authors and poets have also used emotions as symbols to communicate some deeper meaning. This has been used to describe some metaphysical emotions. French language symbolists like Stéphane Mallarmé and Paul Verlaine are noted for this form of symbolism, as are English language writers like William Butler Yeats and Seamus Heaney.

How to add Symbolism:

Though it depends upon the relationship between an artist and patrons. But there are some common ways to add symbolism. This is actually like a code language between the writer and the reader. Specifically, symbolism can be used to:

Use of emotions: The correct use of symbols can create a lasting impression on a reader. For example, in William Shakespeare’s Macbeth, Lady Macbeth is shown cleaning a spat of blood, which she got after killing King Duncan. She tries a lot but is not able to clean that spat, which shows her guilt.

Use of imagery: Symbols have the power to make complex things easy by adding a visual element to the idea. For example in his poem “A Dog Was Crying To-Night in Wicklow Also, the poet, Seamus Heaney’s 1995 uses the image of “burnt wood disappearing into smoke”. This is done to symbolize the concept of dead humans drifting out of other people’s consciousness.

Use of connected themes: The green colour symbolizes money. The same symbolism has been used in The Great Gatsby, where the author F. Scott Fitzgerald’s uses green colour as a symbol for money and materialism that defines life on the North Shore of Long Island.

Define characters: Symbols can express character attributes. For example, in the Harry Potter series of books, Harry’s lightning bolt-shaped scar symbolizes the attempt on his life by Lord Voldemort and the love that saved him.

Conceal darker meaning: In The Scarlet Letter by Nathaniel Hawthorne, Hester’s seemingly feral daughter Pearl symbolizes the sin that led to her conception. Her difficult demeanour represents the secret at the heart of her existence—that her father is the prominent Reverend Arthur Dimmesdale. Only when Dimmesdale’s paternity is revealed does Pearl transition into a positive symbol: the freeing spirit of the natural world.