As the name suggests, the term ‘site-specific art’ means any artwork which is ‘specific to a site’ meaning an artwork which commissioned to exist in a certain location. 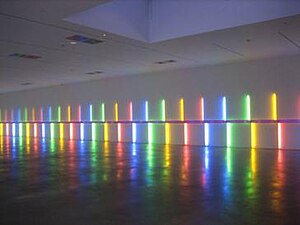 This is an art which is conceived, designed and executed keeping in mind a specific location. This location may be the home or office of a private art collector, public spaces like parks or streets and even within institutional spaces like museums and galleries. These artworks may be used as permanent structures or as a temporary one. While designing and executing this kind of art, the artist always bears in mind where this artwork would eventually be installed.

Since a site-specific work of art is designed keeping in mind a specific or a particular location, so it has an interrelationship with the location. This simply means that if the location is changed or moved, the artwork would lose all or a major part of its meaning. The term site-specific is often used in association with installation art. Hence, it is quite similar to installation art. Land art is also referred to as a form of site-specific art. Since this artwork may be installed in public places also, the artist chooses material accordingly which can withstand the extreme weather conditions and physical activity of the audience.

The term "site-specific art" was first promoted and refined by Californian artist Robert Irwin. But was used first in the mid-1970s by young sculptors, such as Patricia Johanson, Dennis Oppenheim, and Athena Tacha. These artists began to execute public commissions for large urban sites. The term was used throughout 1970 and 1980s as a reaction to commodification of art.

Site-specific environmental art was first described as a movement by architectural critic Catherine Howett and art critic Lucy Lippard. An off-shoot of minimalism, site-specific art opposed the Modernist program of subtracting from the artwork all cues that interfere with the fact that it is "art"

In recent years, site-specific art is increasingly being commissioned at venues of art fairs and biennials.

The idea behind site-specific art:

Before the origin of site-specific art, artists of Modernism were working with modernist art objects. Their objects were smaller in size, nomadic could only exist in the art galleries and museums and were the objects of the market and commodification. However, post-1960, the artists started looking for a solution to his situation. While looking for a solution, they started looking at the site and the context around this site. The work of art was created on the site itself and could survive in that particular location and condition only. Besides, the artwork was immobile, which means its location could not be changed or moved.

The term ‘site’ meant the exact location, where the artwork was to be installed. And this included the unique combination of all physical elements, such as - depth, length, weight, height, shape, walls, and temperature among others.