India as a country is well-known for its art and culture, since time immemorial. Almost every region of India has been known for having is unique culture and style, be it in dance, music or painting. One such painting, which is very popular among people, is called Madhubani painting, which was practiced in the Mithila region of Indian subcontinent.

These paintings were done using various tools, twigs, brushes, nib-pens, matchsticks, and even fingers. The paintings are coloured using natural dyes and pigments. 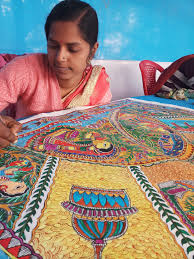 It is characterised by its eye-catching geometrical patterns. The paintings are usually created by women on walls and floors of homes during special occasions like marriages, childbirth, and festivals like Holi, Surya Shasti, Kali Puja, Upanayana, and Durga Puja. Since these paintings originated in the Mithila region in Bihar, they are also known as Mithila art. This art is still in practice in several areas around the state of Bihar and neighbouring country Nepal, with Madhubani being the export centre for these paintings.

Madhubani painting, also called Mithila Painting originated in the Madhubani district of the Mithila region (currently a part of the state of Bihar). Normally, paintings reflect the culture and tradition of their place of origin and tend to reflect the times, when the art was created. However, the same does not hold for Madhubani paintings.

The art originated about 2500 years ago. Originally these paintings were used as “bhitti chitra’, which means inside wall paintings. However, now these paintings are made on other mediums as well. These paintings were discovered during a massive earthquake that hit Bihar in the year 1934. Post this earthquake, the British colonial officer of Madhubani district, William G. Archer, while examining the damage caused by the quake, chanced upon these paintings inside the houses.

The history behind Madhubani Paintings:

According to a legend, the history of Madhubani painting is as old as the Ramayana itself. As the legend does, when princess Sita was getting married to Lord Rama, her father, Janak - the King of Mithila asked an artist to capture his daughter wedding in the form of paintings. And that’s how the Madhubani paintings were born.

Over some time, the Madhubani art has evolved into five distinctive styles, namely Bharni, Kachni, Tantrik, Godna and Kohbar. During the 1960s, the first 3 styles –i.e. Bharni, Kachni and Tantrik styles were practised mainly by the women from Brahman and Kayasth community, who were believed to be from 'upper caste' in India and Nepal. Their themes were mainly religious and they depicted Gods and Goddesses paintings, and scenes from epics like Ramayana. While the other two art styles –i.e. Godna and Kohbar were practised by women of the so-called ‘lower castes’. These women painted more realistic themes like various aspects of their daily life and symbols, the story of Raja Shailesh [guard of the village] and much more. However, in current times, Madhubani art has become a globalized art form. So, this caste-based demarcation has been diluted. Now the artists’ work in all five styles, depending upon their taste. Madhubani art has received worldwide attention. Madhubani painting has also received the GI (Geographical Indication) status.

How are Madhubani paintings done?

The Madhubani paintings are made from the paste of powdered rice. The paintings use two-dimensional imagery, and the colours used are derived from natural sources like plants.

Traditionally, these paintings were done on freshly plastered mud walls and floors of huts. However, now they are done on cloth, handmade paper and canvas.

These paintings have, by and large, remained confined to a compact geographical area. However, the skill of Madhubani art has been passed on from generation to generations. Though the art has evolved, the content and the style have largely remained the same.

What’s so special about Madhubani?

Though the art is very old, it is still a very popular and thriving art among people. The following are the reasons which make Madhubani art very special:

Madhubani paintings have traditionally been created by the women of various communities in the Mithila region. So, apart from being a source of income for these females, Madhubani art has shifted the focus to some very pressing women’s issues.

The outline is made from rice paste. This framework is then filled with bright colours. There is hardly any open space in these paintings. In case, the painting has a border, it is embellished with geometric and floral patterns.

For colouring, the paintings natural dyes are used. For black colour, they use charcoal and soot, while for yellow they use turmeric. Similarly, red colour is extracted from sandalwood and blue from indigo.

Madhubani paintings are characterised by figures that have prominently outlined, bulging fish-like eyes and pointed noses. 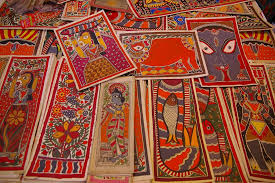 What do Madhubani Paintings depict?