The term Chiaroscuro in art is used for paintings displaying a strong sense of contrast between light and dark, and usually contains dark, bold colors as well as contrast that set the mood for the entire composition. In technical terms Chiaroscuro art refers to those paintings that use the contrasts of light to bring a sense of depth and three-dimensional effects into the objects or figures. The technique focuses on lights and shadows and uses a singular source of light to achieve a sense of photorealistic depth and tone.  This style is also extensively used in photography and cinematography. 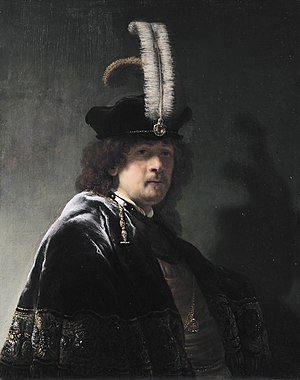 Chiaroscuro art was introduced during the Renaissance and Baroque period. Renaissance period is marked as a time of grandeur and extravagance which was mirrored in the period’s artworks. Paintings began to convey more and more drama and depth and become more realistic in nature. This era’s artists accomplished their desire to show depth and realism by playing with lights and contrast. This new technique revolved around the manipulation of light and dark and used the gradation of shadows to create a more realistic and convincing three-dimensional art scene.

Chiaro, which means light or clear, and scuro meaning dark or obscure, became the defining art trend of the period that helped create convincing art scenes wherein objects appeared in solid forms. The play with light and dark colours reflected the richness of the period beautifully with dark bold colours. Additionally, it also perfectly encapsulated the Baroque and Renaissance’s dramatic flair. The play of light allowed artists to exaggerate scenes in their art work and make them more realistic. Leonardo da Vinci was regarded as the Chiaroscuro master who later went on to pioneer Sfumato.

The main idea of the Renaissance and Baroque period was to engage the viewers, similar to modern day cinematographers, and thus they heavily used light and shadow to give a sense of life and drama to their paintings. The Italian Chiaroscuro art is one of the classic techniques used by the likes of Rembrandt, Da Vinci and Caravaggio. Chiaroscuro art uses light and shadow to generate an illusion of light appearing from a specific light source shining upon the figures or object in the painting.  The painters realized that the contrast between the area of light and dark intensifies the visual imagery and impact of the painting.

As the Renaissance period rolled over and in came the Baroque, the style became a way to emphasize drama and emotional intensity so much so that some artists further developed the Chiaroscuro style to showcase utmost exaggeration. These styles came to be known as tenebrism and sfumato.

In technical language, Chiaroscuro art is totally based on oil paints and uses the paint with thick linseed oil pigment to its advantage to create that depth that artists desired. Early Baroque era artists used this form extensively to showcase how striking the method can be. For example, still life scenes were painted in a dark room lit by a single window, candle or light source, thus illuminating only the faces or key objects in the composition with a golden-ish light.

Initially painters used tempera as enamel which was made of egg yolk however that did not allow painters to smoothly create three dimensional looking figures as it was opaque and thick. Oil paints replaced tempera as the medium of choice for painters across Europe during the Renaissance period. These oil paints were easy to blend and shade and most importantly could be built up in layers. Artists used translucent glazes and were able to apply light tones on dark and blend them in order to give that effect as if a figure or object is actually emerging form the dark or shadows.

Though the term Chiaroscuro became popular and well known in the Late Renaissance and Baroque era due to artists like Rembrandt and Caravaggio, the style actually dates as far back as the 5th century, in Ancient Greece. An ancient Greek sculptor and artist known as Apollodorus Skiagraphos was known to create hatched shadows in his work to show three-dimensional depth. Unfortunately, none of his work really survived, but examples of his “skiagraphia” or shadow paintings can be seen in other Hellenistic works.

Ages later, around the 15th and 16th centuries, Renaissance painters began the process of modifying and improving the earlier shading techniques; one such artist was Leonardo da Vinci. Da Vince brought about a sense of life, depth and volume into his drawings by starting to draw on dark colored paper, and then gradually moving towards lighter tones and ending it by adding highlights with gouache or chalk. He would use charcoal or black chalk to sketch the subjects on a tinted brown paper, and would create the illusion of shadows in area like the folds of clothes, face, hair, etc. by adding layers and layers of chalk. He would then finish off his Chiaroscuro art with white chalk highlights to bring about an emphasis.

His style of sfumato also became widely popular with chiaroscuro art, which meant to “vanish like smoke”. It was to do with adding layers of glaze to the artwork to create a foggy and ethereal effect, like shown in the Mona Lisa.

The Renaissance period saw artists paint with the intent to cast a soft light on the figures or object to create a serene scene, but till the Baroque era entered, the chiaroscuro art style came about which used harsh light to create drama and  intensify the scene. Michelangelo Caravaggio is regarded as the best-known chiaroscuro artist of the 17th century. His paintings would usually contain a black out background, and brightly illuminated objects in the foreground.

Tenebrism is a sub-category of chiaroscuro art and is associated with Caravaggio’s work, thus is also known as Caravaggism. Tenebrism, which comes from the Italian word tenebroso which means dark /gloomy or mysterious.

Caravaggio’s tenebrism became so successful that many artists began to imitate his style, of playing with a stark combination of dark and light for various reasons, such as to give dimension, volume, draw attention to certain areas of the painting, and to create drama.

On the other side of the scale we have a more delicate approach to chiaroscuro by Dutch painter Rembrandt van Rijn, who used light and shadows to create a calm reflective mood, and thus was known for his subtle handling of the chiaroscuro technique.

Known for his portraits, Rembrandt used brushwork to explore the relationship of lights and shadows. Unlike most portraits, Rembrandts faces were in the shadow while only one side of the face would be slightly exposed to a light source. Additionally, his backgrounds featured mid-tones, rather than bold black ones like many artists in this period.

There are many other artists from this period whose works have been deeply inspired by the Chiaroscuro art form, with deep roots in tenerbrism and sfumato. Though all three forms meant playing with lights and shadows, they were used by different artists to bring out a different meaning and purpose; to create an air of air of mystery, intimacy, evoke fear, showcase dramatic flair or to suggest a metaphorical battle by using light and darkness to showcase these dilemmas in a variety of different scenarios or contexts.

Some famous works of chiaroscuro paintings include the Mona Lisa and The Last Supper. The style was also widely adopted by Baroque artists and the Spanish El Greco. In the 20th century, chiaroscuro photography and filmmaking also emerged as black and white films, or film noir became huge mediums, thus artists began to explore the age old concepts of light and dark through chiaroscuro effects.