The story of modernism in Indian art is a complex one stretching over a century. It differs from the ideas of modernity from the west, where it is associated with ideas of industrialization, sovereignty, liberalism, among others. However, in order to understand the ideas of modernism in third world countries such as India, it is crucial to understand the duality of post-colonial ideology that is of identity and progressiveness. While the former takes one back to the roots and therefore might be considered paradoxical to the ideas of “modernity”, the other seeks to assimilate in the larger scheme of global functioning, thereby, moving forward.

The Pre-Modern and Pseudo-Modern Indian Art

Dating from the British colonial era, we can point out the series of rapid changes, hitherto unseen or unheard of in India, consequently engendering change that led to a unique Indian modernism. The British colonial modernity is the early modern period in Indian history, an intermediary phase between medieval and the developed modern. With the British came the European style of Academic realism, Chiaroscuro, oil paintings that initiated a storm of patronage that produced a vast array of artwork during this period. However, it is important to note that the agenda for this patronage was not a desire to promote the arts, rather in the pre-photographic age, it was used as documentation of the strange, exotic lands that the British ruled. Cartography, calligraphy and religious artwork therefore were the most widely patronized, because of this excitement for the new and unseen, so that it could be taken back to Britain for informational purposes. Hence, it is worth noting that most British-period artworks are known by the patrons and collectors, rather than the artist who was a mere craftsman in the whole process.

As the colonial rule advanced and struggles for freedom and expression gained momentum, Raja Ravi Varma (1848-1906) and others claimed fame by transforming the subject matter from idyllic mythological depictions to the ground realities of rural and urban life. We can mark this phase as the pseudo-modern phase where rebellion took place within the confines of Academic realism.

This coincided with the beginning of Indian freedom movement that can be approximately described by virtues like pride in Indian culture, independence from Western control over politics, thought and economy, self-sufficiency, self-governance, equality, freedom of thought and religion. In such a context, the emergence of Bengal school of art can be placed in an important position as it encouraged taking pride and finding an identity in the age old customs, but at the same time, encouraging the formation of the Oriental School of Art, thereby encouraging a search for newer ideals. It can be said that the motive of the Bengal school of art was to find the best possible way out for the new and independent India, building by taking bits and pieces from everywhere and uniting those elements to best advantage.

The Shantiniketan School was both an art movement and a material school, established by Rabindranath Tagore – one of the most celebrated Nobel laureates of all times. Tagore was a nationalist, involved closely in the freedom movement. The Tagore mansion, Jorasanko, was a hub for nationalist activity and in the field of art, it meant an avenue to pursue diverse techniques, rather than a taught program of artistic studies. 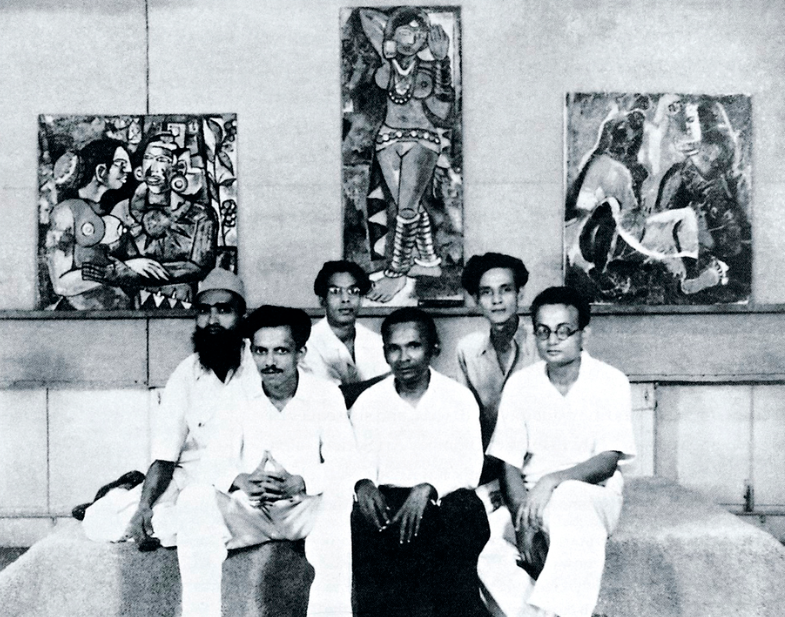 Indian independence was a complex issue, encompassing both joyous and disturbing elements as it came with a heavy price of partition. The post- independence phase in art is thus seen to be seeking answers and posing new questions to what is modernity and what is the cost of it. The Bombay Progressives were one such group, with members whose artistic styles varied profusely, but their vision of placing Indian art on a global platform at par with other nations, just like India was now a republic at par with other nations, was what kept them together. We see India assimilating with the larger global processes and in art, it meant importing of international art styles like cubism, art-brut and abstraction.

The influence of Tantric philosophy on SH Raza can be seen in his renderings of the serpent, triangle and circle.

F.N. Souza’s memory of death and destruction of Partition in his Art Brut style of painting.

M.F. Hussain, known as the Picasso of India for bringing cubism to India.Maqbool Fida Husain, Sita Hanuman, oil on canvas, painted in 1979

Several other artist groups emerged during 1940-50s claiming modernism, such as the Group 1890 and other independent ones like Nasreen Mohamedi, Krishna Reddy and others. Photography emerged as an art around this time and created a buzz in the Indian art scene. Ebrahim Alkazi is known for his visual eye, theatrical mastery, and deep interest in the relationship between art and theater.

The 1970-80s is known in popular terminology as the phase of postmodernism in India. Historically speaking, this was the time of economic liberalization (1971) by the Congress government to tide over distress by devaluation of currency, allowing foreign investment, reducing tariffs on imports and subsidizing exports. This meant greater opportunity for interaction with the West and led to the flooding in of cultural symbols especially from SA. This greater globalization was also set in the internal restrictions now emerging due to the Bhartiya Janta Party’s extreme right-wing stand (Hindutva). With the Indian mass market booming and Bollywood becoming one of the major sellers of art and performance, Indian artists like Anish Kapoor, Rummana Hussain, Nalini Malini all find themselves at a unique position in contemporary art because now their expression of social issues, traditional values or even history are widely heard and appreciated.

M.F. Hussain, known as the Picasso of India for bringing cubism to India.