The Victoria and Albert Museum of London or the V&A is known to have absorbed the collections of the Indian Museum, established by the East India Company in 1799, including those from the Punjab dating from the late 16th to the 19th century. 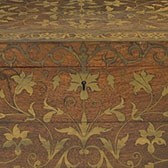 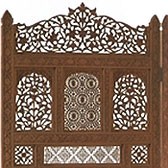 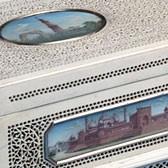 As has been noted earlier, the Sikh Empire attracted artisans, artists and sculptors hailing from the foothills of the sub-Himalayan forests who were masters in wood and ivory carving besides inlaying wood with ivory and brass. Traditionally these techniques were used for the decoration of doors and columns in household interiors.

Fine examples of metalwork at the V&A features the typical Akali turban donned by the Akalis who were were the chosen Sikh warriors raised by Guru Har Gobind at the Akal Takht, seat of temporal authority for the Sikhs in Amritsar. The Akali turban comprises the metal emblem, the gaj-gah (conqueror of battle elephants), which represents superior strength, intellect and daring, made up of crescents and the double edged sword at the top, but some also depict tridents, knives and tiger claws. 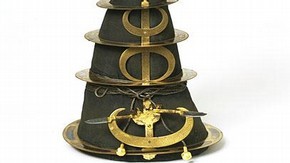 Akali turban (bunga dastar), Panjab, probably Lahore, mid-19th century. Cotton over a wicker frame, the quoits and other embellishments of steel overlaid with gold. Height 46cm, diameter of base 26cm. 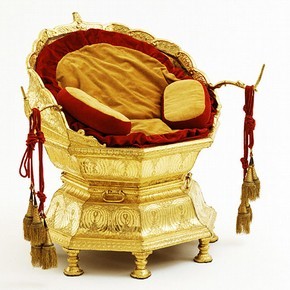 The Golden Throne made by Hafez Muhammad Multani, Lahore, about 1820-30. Sheets of gold worked in repousse, chased and engraved, over a wooden core. Height approximately 93cm.

The Lion of Punjab, Maharaja Ranjit Singh’s resplendent ‘Golden Throne’ was built by a Muslim goldsmith, Hafez Muhammad Multani, between about 1820 and 1830, wherein thick sheets of pure gold were engraved with designs of flowering plants that cover the wooden core of the throne. The Britishers sent the throne to Calcutta in 1853 where Lord Dalhousie had a wooden replica made, before it was shipped to the Indian Museum in London. In 1879, Ranjit Singh’s Golden Throne moved to the South Kensington Museum, later renamed the Victoria and Albert Museum.

The exclusive V&A collection also boasts of Pahari paintings, literally meaning those inspired by the hill people or Paharis. Pahari Art was flourishing in Maharaja Ranjit Singh’s court in the early 18th century and by the late 18th century, even Muslim, Hindu and Sikh artists were patronised by the Maharaja. And apart from the court scenes, portraits of the ten Gurus, and paintings or drawings illustrating the Janam Sakhi, the traditional and much revered account of the life and travels of the founder of the faith, Guru Nanak were immensely popular.

Nainsukh, ‘Mian Mukund Dev of Jasrota riding through a meadow’, about 1754

Some rare photographs preserved from the 19th century include early images captured by the camera of the architecture, people and landscape of the Punjab in the 1840s. Interesting and detailed photographs of the Golden Temple by Felice Beato, an Italian-born photographer who travelled through India between 1857 and 1858 and in 1864, by Samuel Bourne, the most famous commercial photographer in India at that time evoke nostalgia of those glorious days. Bourne captured Amritsar and Lahore through his lens, which included Ranjit Singh’s tomb, his marble pavilion, and Lahore Fort, besides the common people of the Punjab, including Sikh soldiers, nobility and Akalis.

Felice Beato, ‘View from the causeway from the Harmandir, Amritsar’, about 1857

Pertinent to add to this magnificent list of collections of Sikh arts and artefacts are the creations of the much admired August Schoefft. Hungarian artist August Schoefft came to India shores via Turkey, arriving at Bombay in 1838. As news of his unique artistic skills travelled across the length and breadth of India, he spent few years travelling extensively and working on commissioned painting for various clients, until 1841, when he reached Lahore, capital of the Sikh Kingdom during the reign of Maharaja Sher Singh. Alexis Soltykoff visiting Lahore in March 1842 writes of the famous portrait of Sher Singh: ‘There were five or six portraits in oils without frames, the work of Schoeft, the German painter who has returned to British India. There was also a portrait of the King covered with jewels…’ 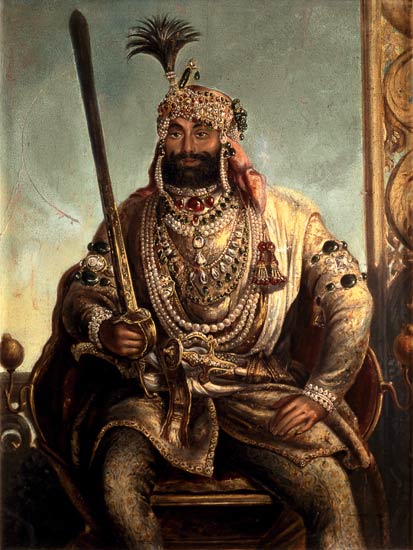 Both creations of The Lahore Court and Ranjit Singh at Darbar Sahib and some other paintings from the Sikh Empire were exhibited by Schoefft at the Vienna Salon of 1855 to much critical acclaim. Reportedly, both these paintings of Maharaja Ranjit Singh ended up in Maharaja Duleep Singh’s collection who was living in England and passed on to his daughter Princess Bamba Jindan. When she left England and moved to Lahore marrying a British doctor, they were bequeathed to her secretary Pir Karim Baksh Supra after her death. Supra sold Schoefft’s paintings to the Government of Pakistan in 1959 and presently, they are a part of the ‘Princess Bamba Collection’ at the Lahore Fort Museum in Pakistan. 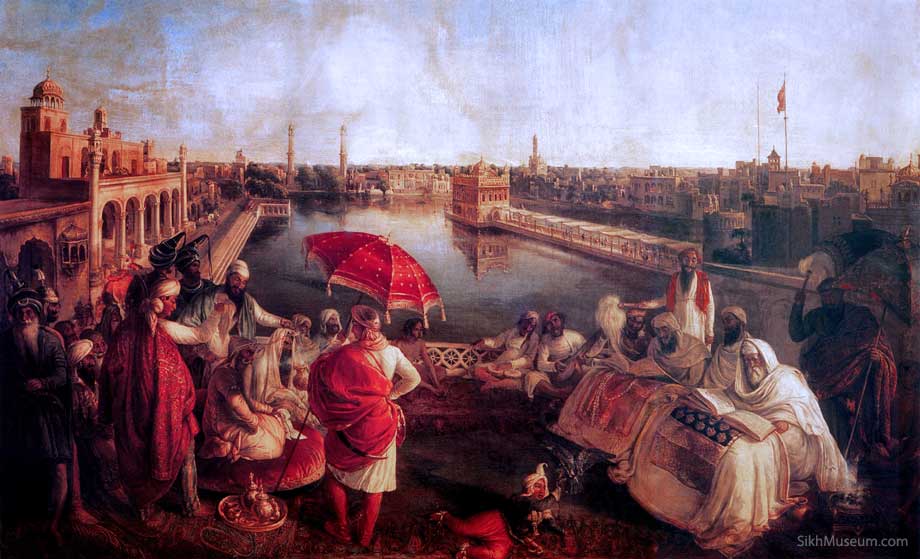 In this trilogy of ‘Sikh Art’ blogs, we have tried to offer a glimpse into the artistic treasures that have been a part and parcel of the erstwhile Sikh Kingdom.