Ranjit Hoskote’s curated art show Zameen, is a passing tribute to MF Husain’s iconic painting by the same name. Hoskote remembers a time in his childhood spent cycling around Saket and Mehrauli in Delhi and sometimes taking a detour via what is now Lado Sarai. The Lado Sarai that he remembers is unrecognisable in contemporary times, where charpoys and dusty lanes have been taken over by modern buildings that now represents Delhi’s art district. The idea of the transient nature of land, its inevitable linkages to the idea of possession, and the multiple realities it symbolises in human society all form the background for his curated show, Zameen. In Hoskote’s words, “The processes of gentrification and urban expansion; the inexorable spread of the metropolis as it swallows but cannot fully assimilate the villages formerly at its periphery; the adaptability shown by Gujjar and Jat landholders charting the transition from a village economy to a web of landlord-tenant relationships that links them to gallerists, artists, designers and art dealers; the variant claims to habitation and neighbourhood; the interplay between ownership and migrancy: all these are elements in the grand narrative of zameen, the deeply evocative and richly resonant Urdu word that gives the present exhibition its title.”

The artists who are part of the show have taken up different perspectives on the meaning and purpose that the word portends, and represented them in their artwork. As a group show, multiple perspectives on this very loaded symbol comes forth, various polemics are revealed, as the artists thrash out several perspectives; this is the opposite of propaganda, the healthiest a discussion on the philosophical question of the meaning of zameen can get. In Vulnerable Guardians by H. G. Arunkumar; portraits of traditional farmers standing with agricultural land in the backdrop, painted on reclaimed wood, haunts the viewer. The delicate state of the artwork is a metaphor for sustainable agricultural practises that are vulnerable to geo-political and socio-economic forces of change in the interest of stakeholders seeking to maximise profit.  The farmers captured against a bleak scenario seem to be peering into the uncertain future. 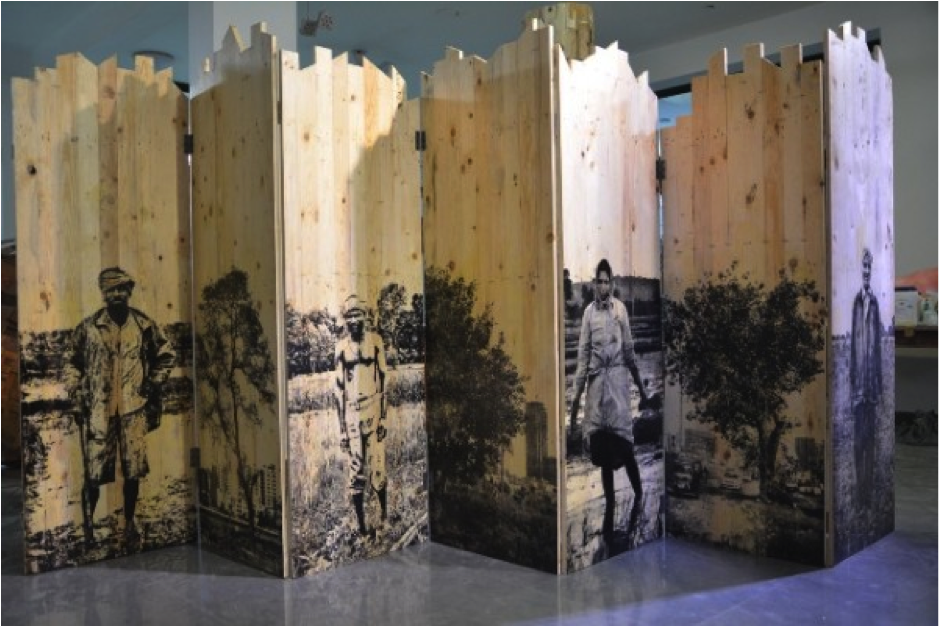 Ashim Purkayastha’s work has always been known for its social and political consciousness. Family, a work that has been continued from 2008, has figures arranged in the manner of vintage studio photographs. Found objects are stuck to the figures where eyes should have been, seemingly on top of them. The black marks have been done with hand and finger impressions.

Baiju Parthan has depicted the symbiotic relationship that the concept of land has with time. Baiju Parthan’s series of paintings Truth Serum is a rhetoric for how history is inevitably recounted; cultural history as an imagined real and ideal, with golden ages always located in the past. Done in acrylic on canvas, a blue maharaja figure dwells on as a representation of the glorious, imagined time in the past. The second painting has a figurine that is the personification of time itself, continually swallowing the existing world into oblivion. A bulldozer, a machine that regularly churns earth, has been placed below the figure, encapsulating the change that time brings to landscapes. 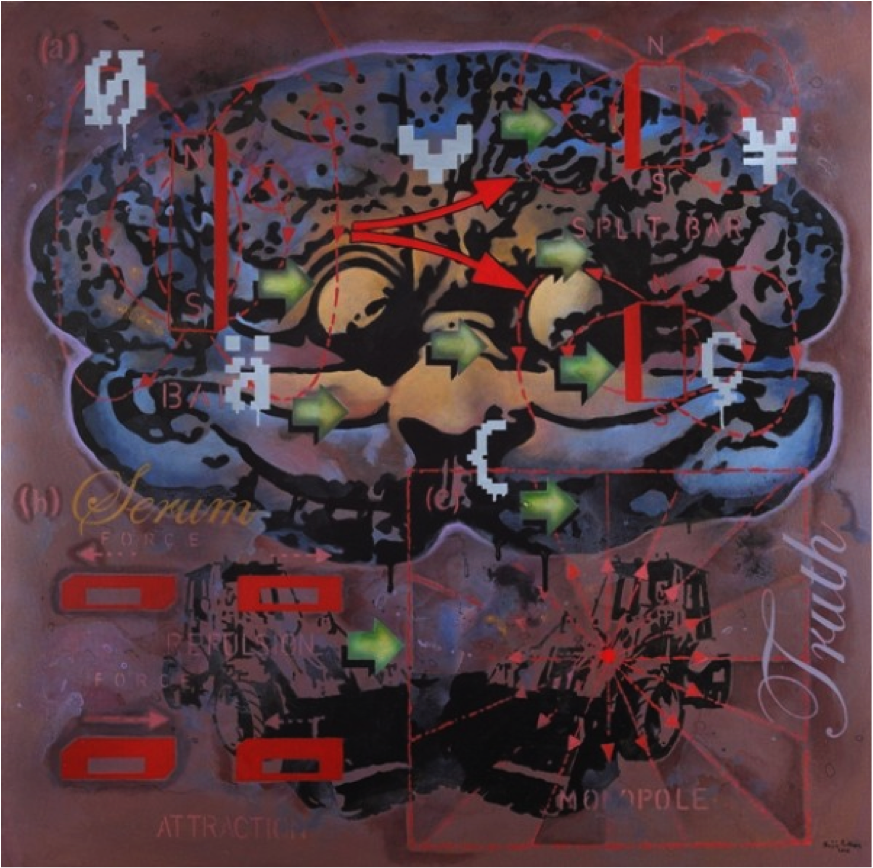 Gigi Scaria’s Soaked has little islands of land in a river full of blood. Blood and land have been inseparable for ages, genealogy determining the possession and treatment of land, and often being the determining factor behind the concept of nationalism. Even more importantly in our times, much blood continues to be shed over land, and its possession. Half made buildings, flags and wells immune to this island of blood around them point to this fact overwhelmingly in Scaria’s artwork. 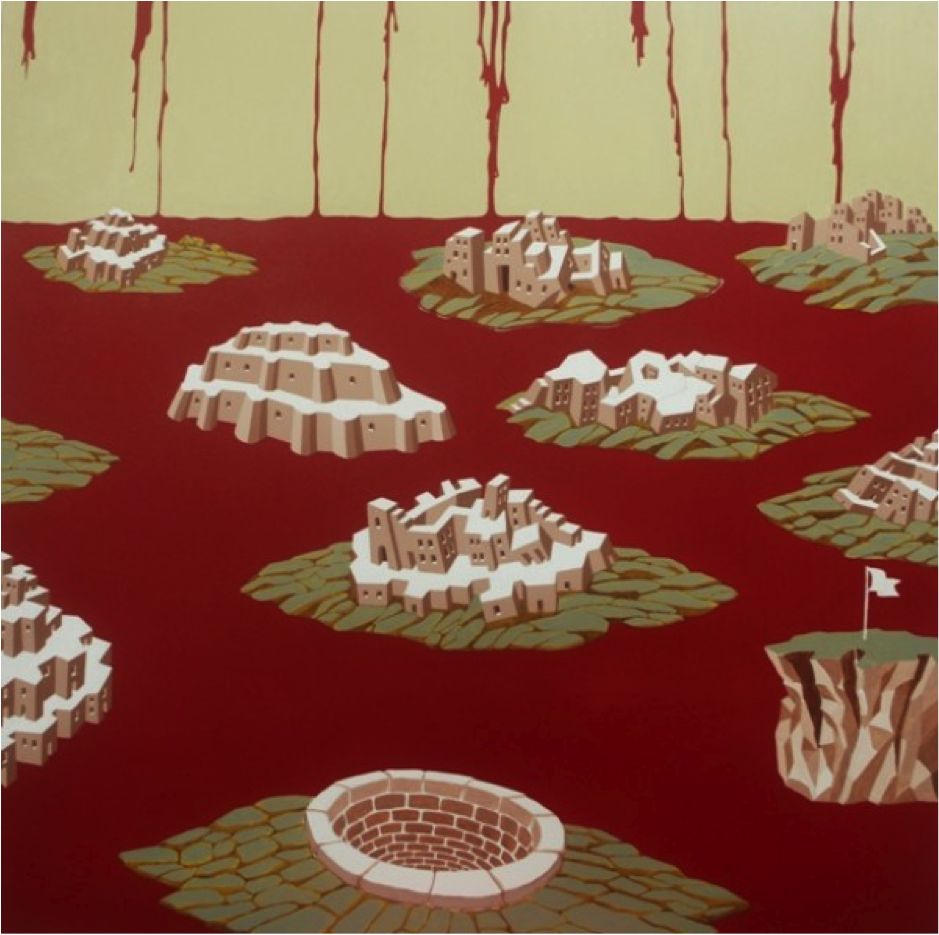 Ryan Lobo’s A Million Mutinies, is a series of photographs that explores the Bir Khalsa community’s agendas and ideologies. These photographs were taken at a talent show in a small town in Punjab. All the subjects of the photographs belong to the Tarn Tarn district, a district that suffered intensely during the Sikh insurgency in the ’80s. Vishwajyoti Ghosh’s Land is the Only Currency – I, explores the economics behind land holding, and its implications for a developing country such as India. Done as painting s on archival print, it is a commentary on one of our biggest political debates since independence, agricultural land and its dependents that form a majority of our population. 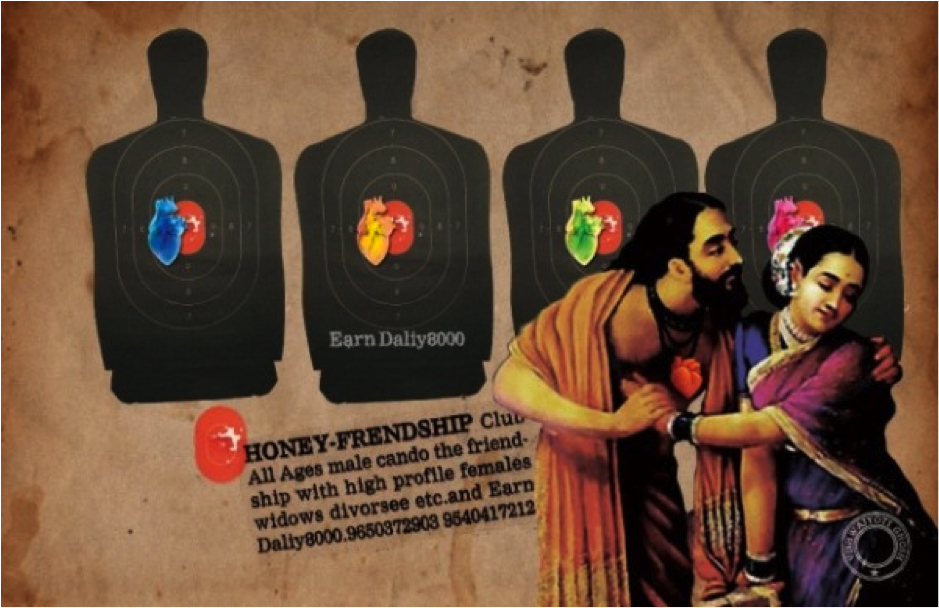 His other artworks, the Dollar Dream or the Honey Friendship Club, is tweaked with a sense of humour as he uses a Raja Ravi Verma work juxtaposed with other elements, such as a newspaper advertisement soliciting females and other such commonly seen visual icons, and marries them together on one canvas to great effect. Land rises above geographical boundaries, it is a sum total of its culture, politics, economics, sociology,  anthropology, its meaning takes within itself the different facets of human existence.

The exhibition was on through January, in Art District Gallery XIII, Delhi.