Nature Morte has endorsed Anita Dube ever since its inception, and this is the third solo art show that they have put up of the artist in their New Delhi gallery. This time on, the works that have been included in the solo show are some that have been never exhibited in India, and includes works that have been part of the gallery’s main space for the past 14 years as well. Anita Dube’s artworks involve sculpture, photography, video, installation and performance and are highly individualized works that are nevertheless very informed by socio-politcal context. Her current artshow Yours Disparately has a number of works included here that have been previously made for international exhibitions and have never been available for public viewing, including works that are from this very year. Text and language is used by Anita Dube as a metaphorical device, in some of her newer works, even as a metaphor for themselves, and a philosophical study in epistemology. 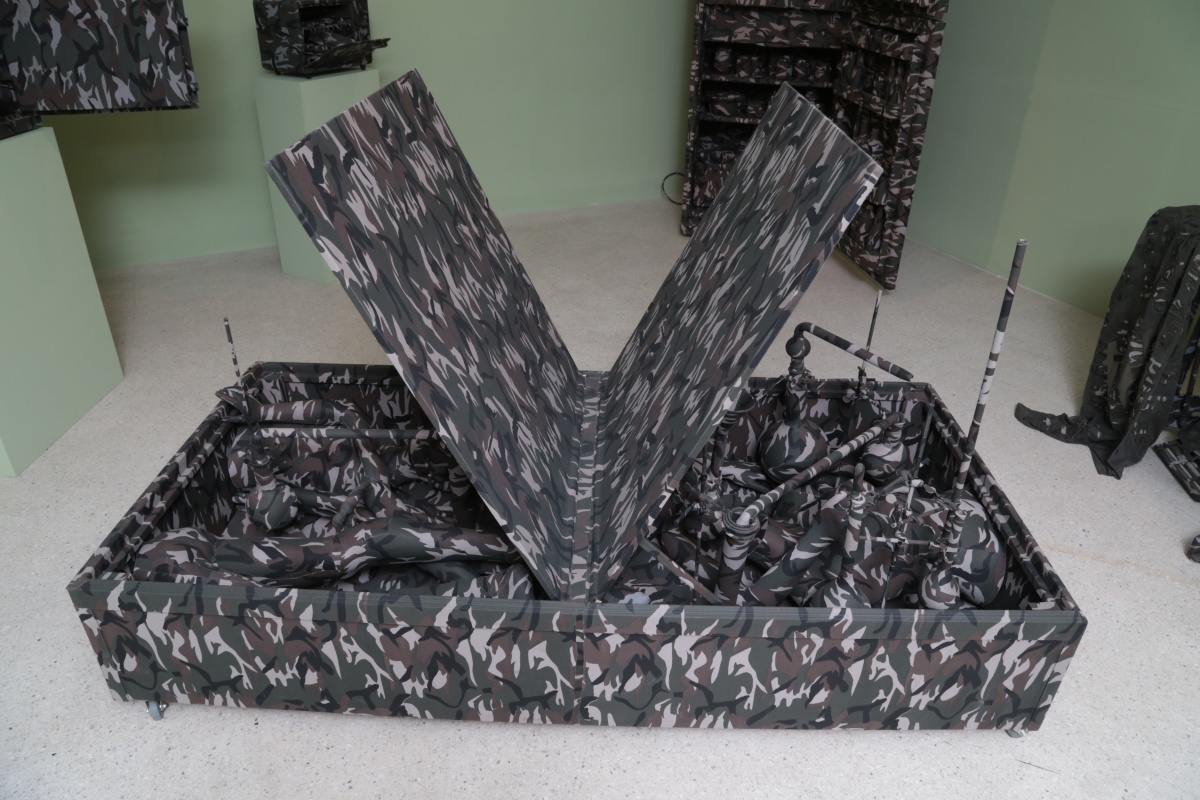 Her work Strike for instance, has the word Strike engraved in big eye-catching block letters on the canvas. Hundreds of staring enamel eyes populate the space around the word. The artwork seems to be arrested in motion, at the time of capture, the eyes were in the process of reproducing and spreading on the canvas in an unpredictable manner. There is an unmistakable dialogue here about the relationship between the viewer and the perpetrator of an event – the event doesn’t exist if it hasn’t had an audience. Would wars have any meaning in the public sphere, if its events, and turnout were to be wiped away instantly without being recorded and communicated meticulously? The human desire to know equips the public sphere with the power it has in human society and the importance that it is accorded. Strike’s counterfoil becomes Dube’s other artwork Justice, depicted as a bleak prison spewing toxic material into the air. Justice is again engraved into a piece of wood, the only negative space in the artwork, and sinks under the burden of its own intent. The establishment of the concept of justice has had the opposite results, imprisoning the very people it was established to free.  Dube’s artwork is never far from the political realm. 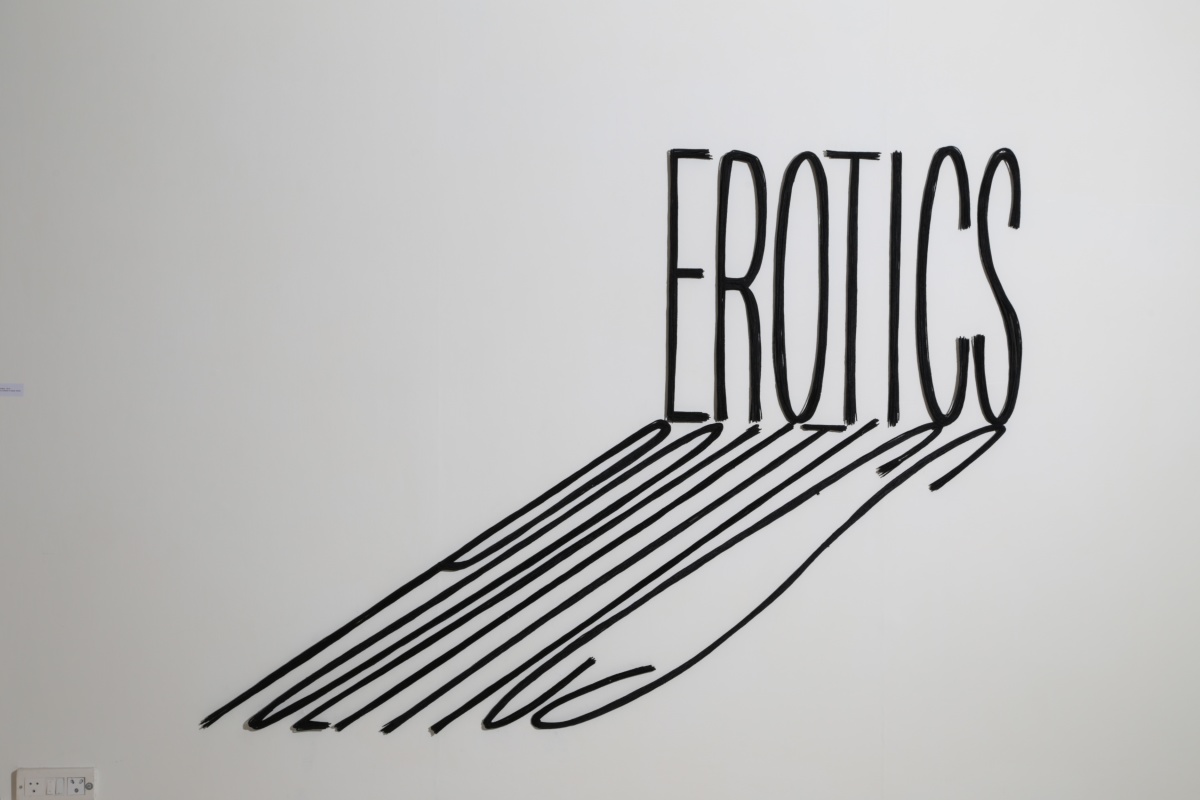 In another artwork, in big black letters embossed on a black wall is the word “Erotics”. As though Erotics were casting a shadow on its left, emerges the tilted letters spelling “Politics”. Politics over here is Erotics’ long shadow. Anita Dube breaks convention when she speaks of the inseparable connection between public and private space. How sexuality is interpreted and defined has a history of patriarchal hegemony behind it. It controls the parameters of sex. While eroticism has often been a major part of the liberal movement at all stages of history, and is looked at as a freeing tool by many social revolutionaries as well as movements that are political or spiritual in nature, erotics is a tool of establishing oppression (patriarchal or class oppression for instance) in the public space as well. Thus, the public and the private can never be completely separate. If the mind were erotics, and the body the site of politics, politics would never escape the long shadow that erotics cast on it.

Perhaps the most haunting work of the show, is an e-catching installation that occupies a whole wall, and spells out the word Kash (Where Mir Went Missing). It is made with fiberglass roundels that resemble marble cut in the shape of traditional decorations spaced evenly to spell the word “Kash” in the Devnagri script. If one looks closer, black and white photographs from Kashmir occupy the empty space in the middle of each of the round structures. Kash is one of the more haunting works of Anita Dube. It speaks of the tragic dilemma of a beautiful state which has become synonymous with violence and unrest. Partitioning the word Kashmir into two has a powerful impact, especially since kash means wistfulness in Urdu. The photographs make the presence of the crisis painfully sharp. Mir has gone missing in the word, as well as from the Kashmir Valley, a poet revered and read for generations after he left the place.

War and its after-effects enters many of her art works. In Phantom Liberty, militarization has invaded the domestic space to frightening effect.  Stacks of money covered in camouflage material has been stacked in the safe, the fridge and the tool box here. No item is spared, each item has been covered in military garb. The sewing machine spills a text by the German philosopher, Neitzche, another instance where text is used as a metaphor in the artwork itself. The title itself is another allusion to a text, in this case a film by Luis Bunuel that criticizes authority and the oppression of conforming to military discipline.

Anita Dube’s solo show is not comforting. It raises questions, it alienates subjects of study, and like a logical argument, it traces the vicious path that violence takes and emerges in not-so-apparent facets of everyday life. There seems to be no escape unless the hegemonising nature of oppressive politics is addressed, and denial is definitely not the solution here.

This show is running in the gallery until 10th January, 2015