Praneet Soi’s solo show Srinagar is a journey through a land with a culture that is increasingly eclipsed by it’s scarring political history. And yet, none of those scars seem to show in the timeless papier-mache tiles which depict the gorgeous pietra dura work of the Mughal era.

When you first walk into the room, it takes you a while to get used to darkness and dim lighting. Soi takes you on a vision of the valley as it once was and still stands, albeit threatened by the increasing militarisation and human rights abuses. The mixed media exhibition consists of papier mache tiles, a slide show, images of anamorphosis, chalkboard texts- all created and collected in the artist’s journey of discovery of a forgotten art. Projections of images explore the pietra dura at Sufi shrines.The press note states that the tiles ‘play incessantly with the tight frame they are bound by. Often they transform into vignettes of the valley, often the valley becomes the patterns’. From lines of turquoise and green that give way to a cool blue of a lake, chinar leaves with resplendent patterns, blades of colour that intersect in carefully designed geometry of borders, the frames offer a picture of serene symmetry that seeks to articulate a parallel narrative to the one we know of Srinagar today. 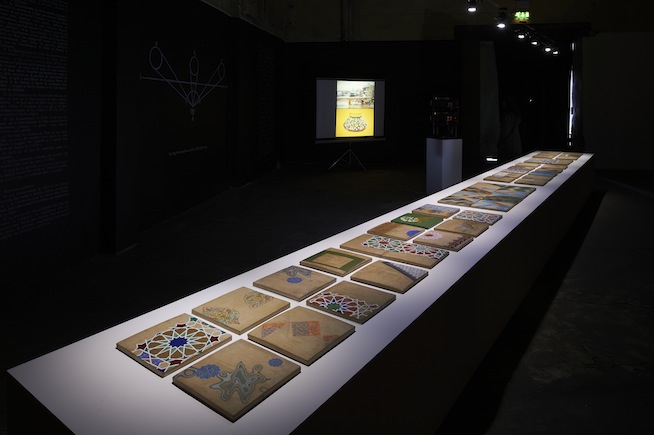 Soi’s exhibiton is both expository and exploratory. In the tracing of a forgotten art, he stumbles upon a migrant artform, and in depicting this migration, speaks of his own life story. Soi’s own family migrated from Pakistan to Delhi and finally settled in Kolkata in 1950. Born in Kolkata in 1971, Soi first studied painting at the Maharajah Sayajirao University in Baroda. In this tile, we find him retracing the intricate patterns of the pietra dura onto a uniform green landscape of the tile. The symmetry and the delicacy with which the painted motifs have been constructed struck me as remarkable- not a speck of paint out of place.

Soi’s first visit to Srinagar was in 2010, when he first met Fayaz Jan, the ustad of an atelier who trained apprentices to paint traditional motifs on papier-mache boxes. He spent ten days in the city documenting the Sufi shrines like Dastagir Pir, which is now being rebuilt after a fire, and Khanqah-e-Moula where the 13th century Iranian Sufi saint Mir Syed Ali Hamdani meditated. He decided to stay in the city and familiarise himself with it. He studied the ancient architecture, the motifs in the ancient Sufi tombs- all of which find representation in this exhibition.He later returned to work in collaboration with these craftsmen in the spring of 2014 when the International Production Fund (IPF) commissioned Srinagar, a new work for EVA International- a solo show that displays papier- mache tiles with traditional geometric designs that trace the delicate history of Islamic art and architecture in India. 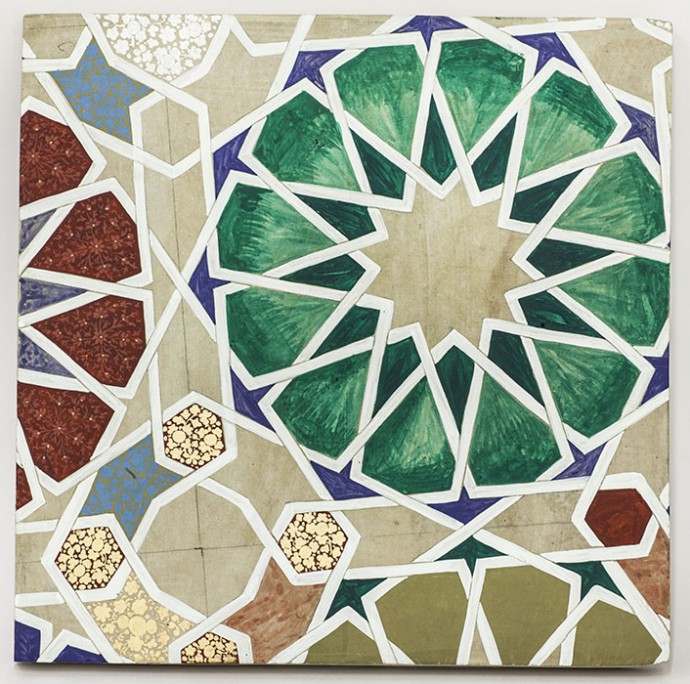 Inspired by the pietra dura he had spent his first visit documenting, Soi set about reproducing and representing the patterns from the walls of the shrines. The geometry seen in the above tile is reminiscent of the ones we find in Islamic art- the strong bold lines of white are perfectly symmetrical, intersecting at interval in a rigid circular patterns that inter locked into each other. It reminds one of the dancing dervishes- the circle being the circle they spin around in a trance, interconnecting much like these lines, in their white garments.

Soi chose to work with papier mache because he feels it accurately represents this symbolic journey of an art form and culture from Iran to India via the Himalayas, during the Middle Ages. Shah Hamdani, a Sufi teacher, converted the Buddhist ruler to Islam and set about teaching the locals how to make papier-mache. This took off, and the craftsmen experimented with it to give rise to what remains of it today. Through his exhibition, Soi has struggled to depict this symbolic tale of migration, this aesthetic image of Kashmir that might be altogether borrowed, yet is intrinsic to its very identity. In the choice of colour, and the muted shades, we find hints of Buddhist austerity, blended in with the intricate craftsmanship of the geometric Islamic pietra dura. The chinar leaf, a symbol that is so intrinsic to Kashmir, travelled to Kashmir with the Islamic migrants, much like this art. In the white overlaid border, we see the deftness and attention to detail that juxtaposes sharply with the gray starkness of the leaf. Along with the projections of pietra dura from the Sufi shrines, the slide show also displayed pages from the the diary of a Khatumbandhi artisan, and through it, escapes through layers of time to show the experimental journey of the art form. Srinagar, however, in its own way, addresses the turbulent situation in Kashmir through Anomorphosis in a chalkboard installation. Anamorphosis is a method of distorting images so they can only be seen from one angle. The distortion created by Anomorphosis seems an appropriate metaphor for the political troubles of Kashmir, and the conflicting perspectives through which all its issues have been addressed. The two texts that Poi has used are the abbreviated tracings of the Instrument of Accession signed by Maharaja Hari Singh and Lord Mountbatten in 1947 and the United Nations Security Council Article 47 which lays out a framework to restore peace and order in the state leading towards a plebiscite- texts which continue to haunt the fate of Kashmir when today. This quiet play of perspective stands out against the otherwise lack of political commentary in the exhibition. 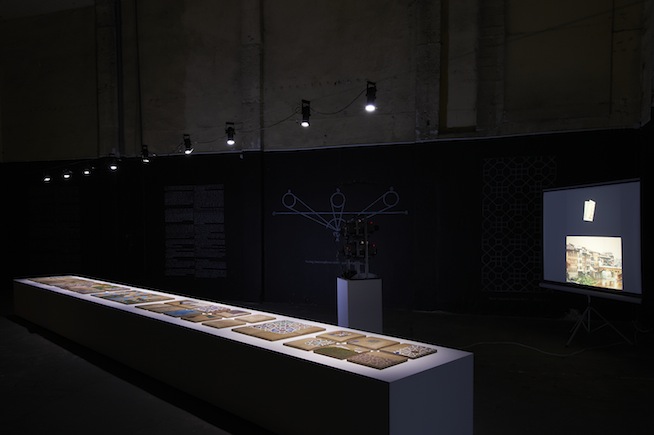 The fragmentary nature of the state of Kashmir, the disintegration and the disharmony which reigns chaotically in the space finds peculiar and apt expression in this tile. The crude fragments of red with intricate work on them are islands separated by disintegration, and the space at the lower half seems to represent the slow degradation into nothingness that awaits if this sociopolitical turmoil is to continue.

The exhibition, then, is a meditation through time and geography, of an art, its artists, and through it, the land and culture that defines it all. In the delicate and precise art of the papier-mache tiles, the art which has formulated the imagined memory of the place comes alive- the chinar leaves from Iran that now characterize Srinagar, careful pietra dura that has traveled through generations of refinement and experimentation. Layers of time fold with the ancient patterns, fragmenting old motifs and forming new ones.