Artsome is a first of its kind endeavor to fill the lack of education and exposure to art in the Indian Subcontinent. 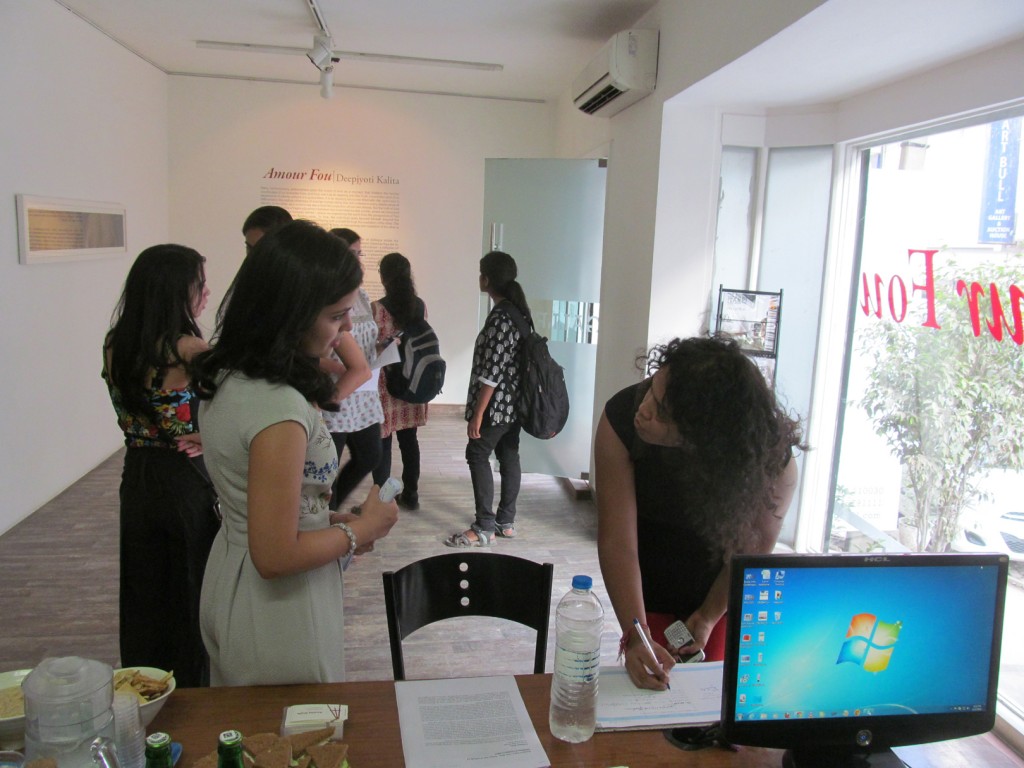 Sample this: A beautiful September afternoon, the dimpled air of the Saturday moist with the sole ambition of turning it into an event to remember. This was a first-of-its-kind orchestrated event, where the elite nature of an art gallery was converted into an interactive, collaborative space, which was playful and sprightly. Indeed, the conversation was spiced with the kind of gently joshing banter that you would expect from a group of young people who saw themselves as participants, rather than just observers. The wall between the audience and the artist was non-existent; we were all worshipers at the altar of Art. 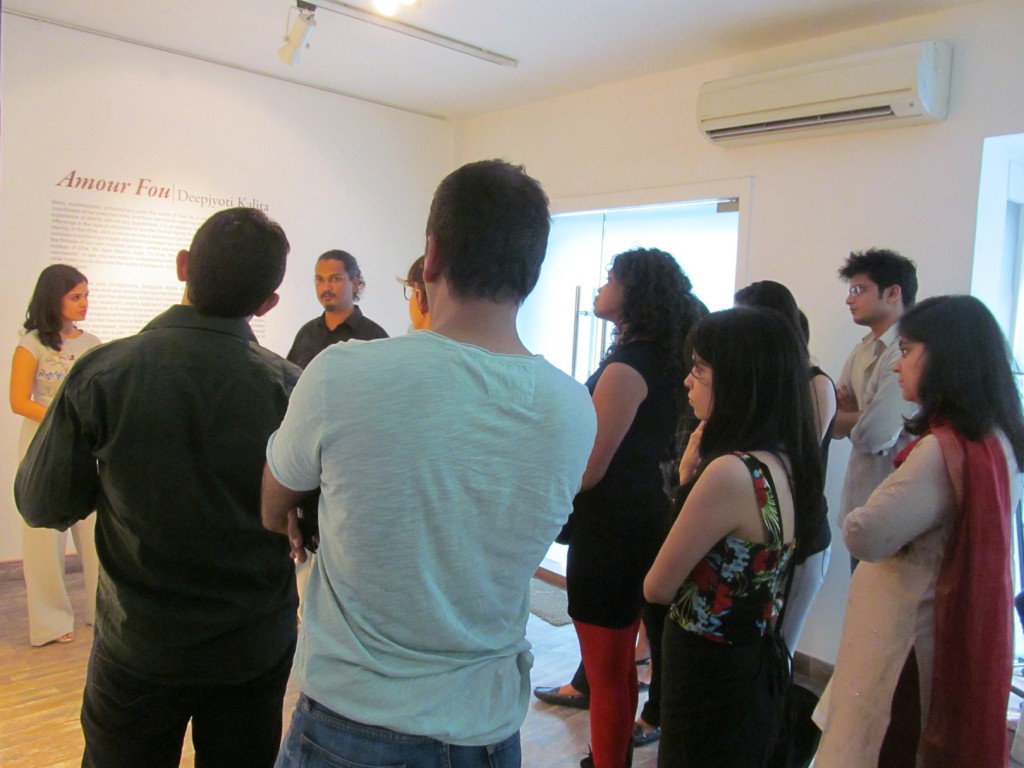 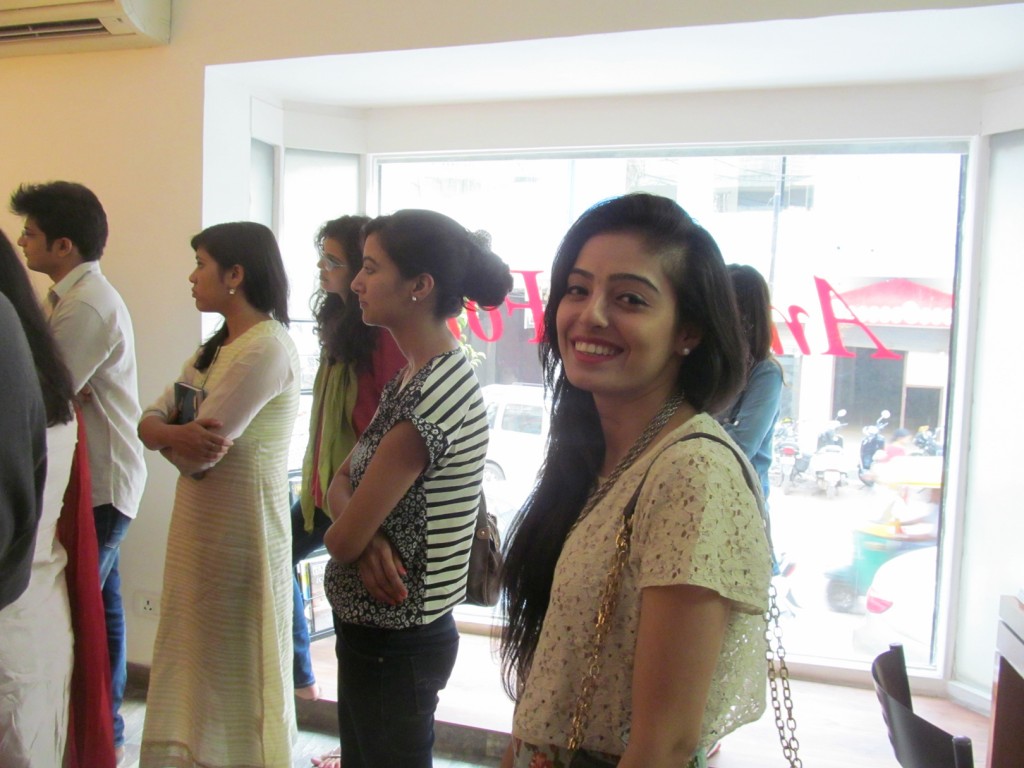 An upcoming name in the Indian Contemporary Arts circuit, the young artist in question, Deepjyoti Kalita’s works are varied and exciting. Kalita’s body of works explores the relationship between man and woman and its pursuit of self-interest through sexual gratification. He was an ideal choice for this event – a young star on the artistic horizon, who is contemporary and topical, and who believes in reaching out to modern sensibility rather than focusing inwards. 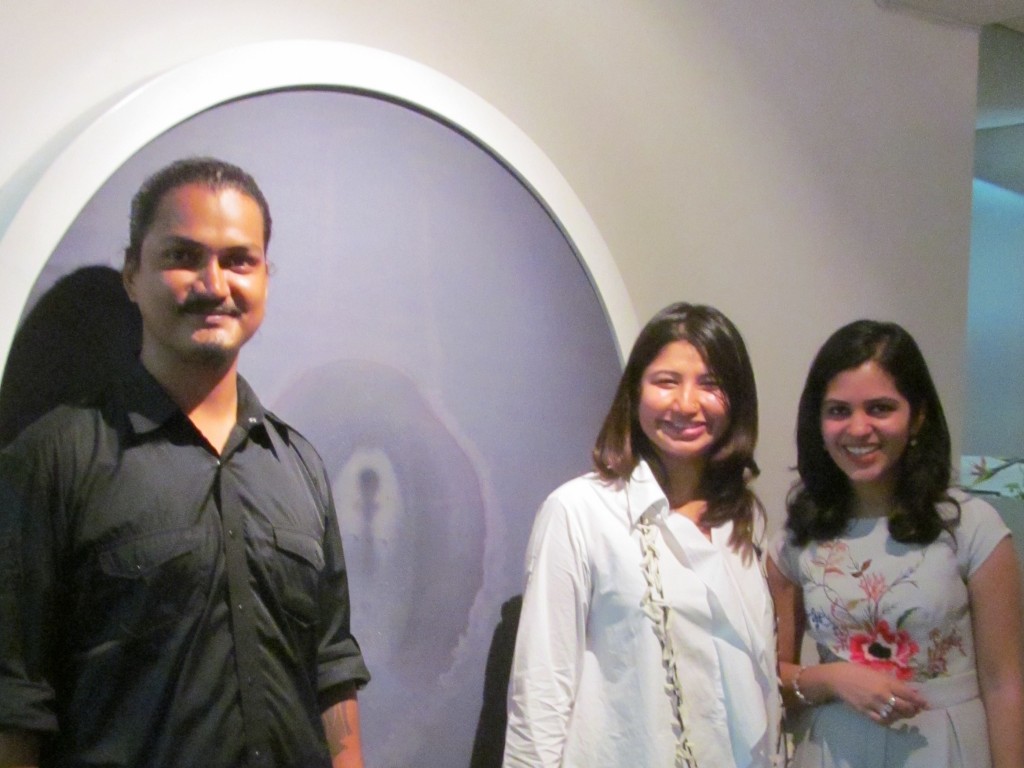 The main themes of this show were self vs. other: sharp boundaries which are actually false, delusions, love of power rather than power of love. In Freudian psychiatry and psychoanalysis, the term narcissism denotes an excessive degree of self-esteem or self-involvement, a condition that is usually a form of emotional immaturity. This condition makes love impossible, as love is more about meeting someone on their own terms. We went from work to work, examining them, and talking about each in detail.

For e.g. – The above work Weave me in winter, ferry you in summer is Badiouian in theme, love is somewhere between a trickery of semblance which covers over the vulgarity of desire and the pursuit of a pseudo-transcendental truth. Visually it is very beautiful as it combines the divine act of love with the grotesque act of consuming parts of each other.

Anubha, the Director of Artsome, explained the context of each work of art, and talked about its possible meanings. She made sure she was malleable enough to allow Kalita as the artist to be puppet-master and puppet, both. Creator and partaker, manipulator and manipulated; these two sides really are almost indistinguishable, so far as to throw the distinction between them into yet sharper relief. It was imperative that the show be natural and not staged. The Director and Artist were in sync, the refreshments were free-flowing, the audience were immersed in the conversation. It was a perfect start to a new venture. 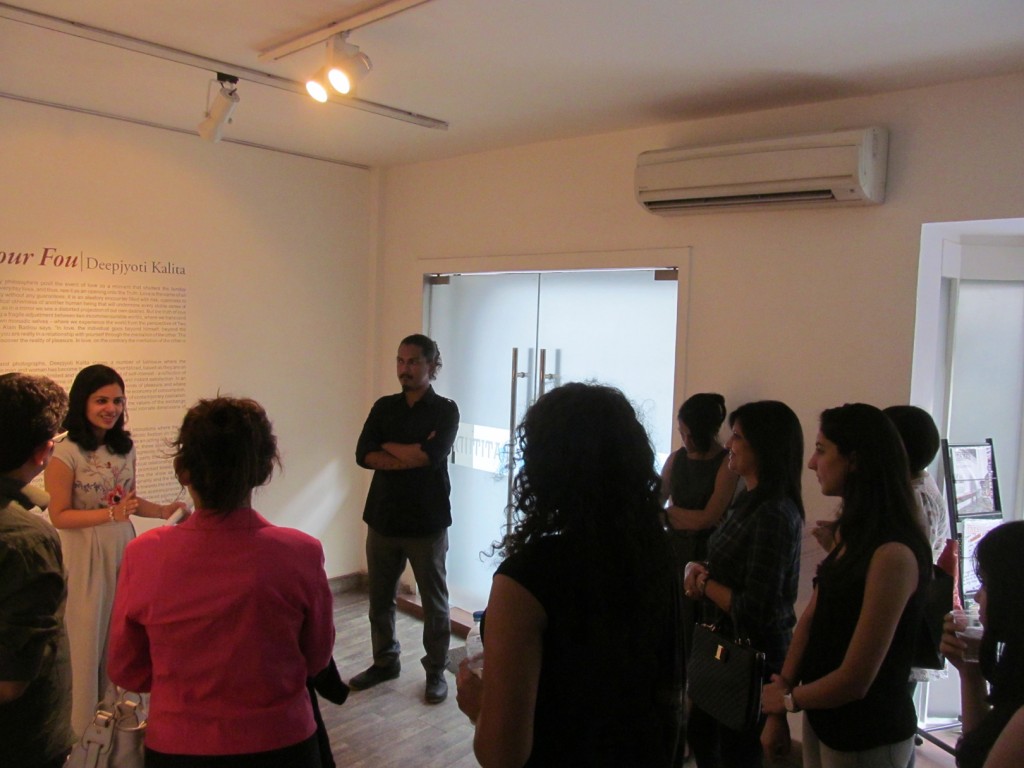 Kalita displays a formidable familiarity with the works of philosophers like Foucault and Lacan and Nietzsche, and takes for granted a capacity for both abstract and worldly thinking. At the same time, he also has a good grasp of his roots – Indian mythology and Bollywood which are cultural institutions of India. There was photography as a medium, the same photography which is the medium of the youth in this Instagram dominated culture.

Yet sub-consciously this generation, ( we were all in the age group of 25-34), molded by technology yet somewhat  skeptical of it as well, was the perfect example of the reason this work was there in the first place. After all, we might be born in the 80’s but the universal soul, the universal quest for love, and the universal quest for an all-rounded existence were concepts time immemorial.

The work is inherently inspired from the Museum of Broken Images/ Relationships. This is a museum based in Istanbul, Turkey, where the broken products of relationships lie, especially those relationships which have gone awry. It is based on the premise that Love is supposed to open up solipsism of “the one “whilst teaching us to meet the “other”. Humans want meaning.” Yes, this is clear from introspection, observation and cognitive science.

The event was successful in highlighting the fact that love is older than capitalism. But the romantic variety, along with its peculiar pains, takes cultural center stage just as capitalism makes its debut. That’s no coincidence. Capitalism and romantic love have grown together, reinforcing and reflecting each other in ways that we, those who were very young when 1991 and liberalization happened, hardly notice. 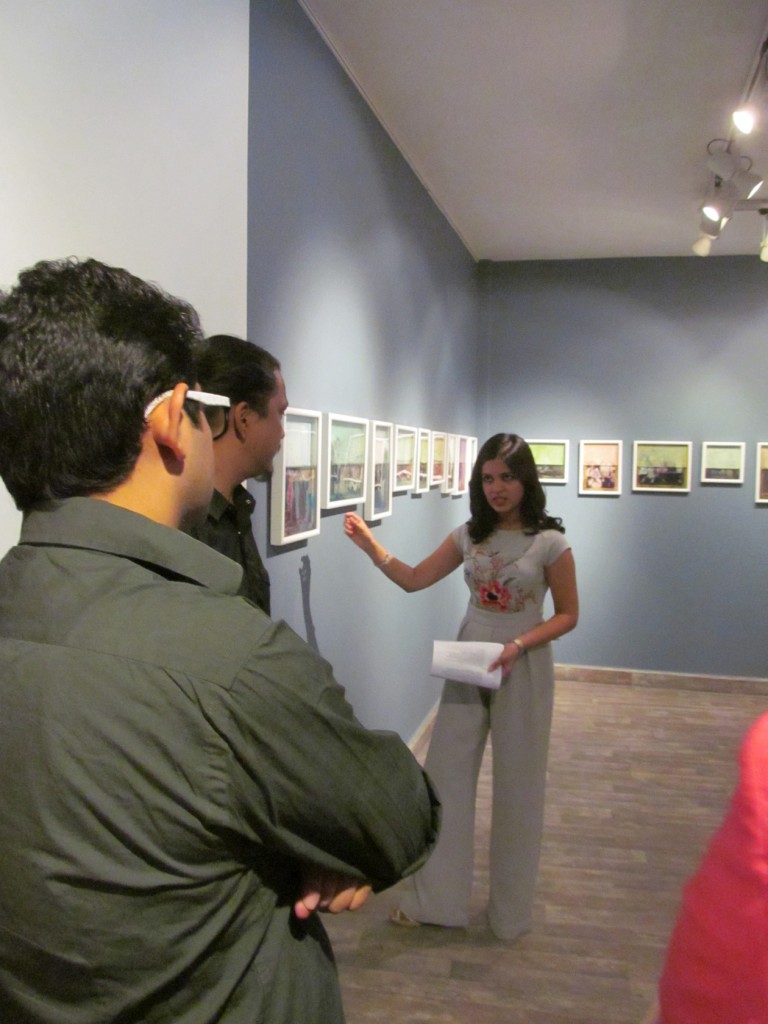 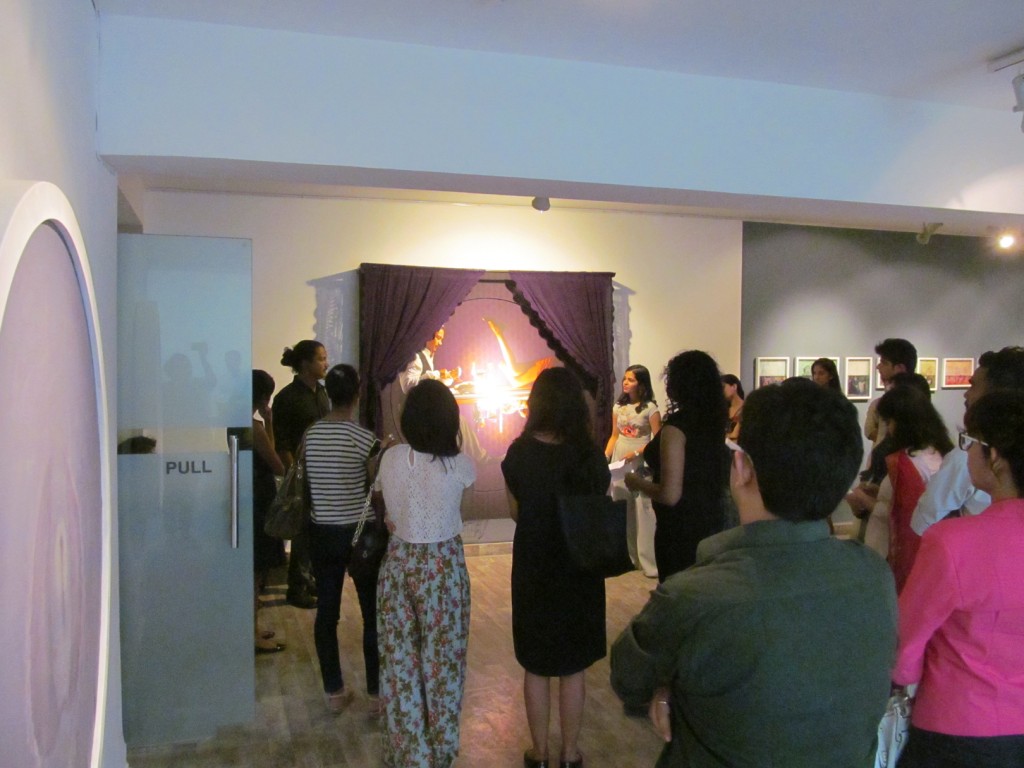 There were 9 works, some of which were titled very interestingly, be it ‘Change me or be like me’, ‘Aphasia’, ‘Lachrymoscope’ etc.

Change me or be like me talks about the violent expression of love, and exposes the artist’s wide range of knowledge, from sources as divergent as Indian mythology ( the story of Hanuman, inspiration from Bollywood [cutting yourself], Western philosophers ( the repression of desire, which ends in abusive relationships – Lacan) and so on.

Aphasia is a disturbance of the comprehension and expression of language caused by dysfunction in the brain. His photographs exist with the desire to bury memory but instead encounter its material inscription that preserves it in its entirety like a fossil preserved in amber. The process of archival is indistinguishable from depletion – and the usage of water highlights this discrepancy.

Kalita doesn’t speak straightforwardly about his life. There is much digression and a bit of pontificating. But a shape emerges, and he proves himself a deep and subtle storyteller, with a very good eye for dramatic detail—the wounding stray comment, the surge of shame, the livid parable. The very fact that he uses his own face in certain portraits as well as his own body exemplifies the theme of personality as a force one cannot escape from – to tweak T.S. Eliot a bit!

The aesthetic deadlock of discussion mitigated with passion both overt and covert shows us that intellectual modesty in the face of complexity may be the surest wisdom. The youngsters who thronged this event were all party to the important distinction between creating and telling. They were at once adventuresome, lyrical, and intellectually speculative. They questioned eagerly, dissident when needed, and yet agreed that art and creation and originality were all marvelous concepts. 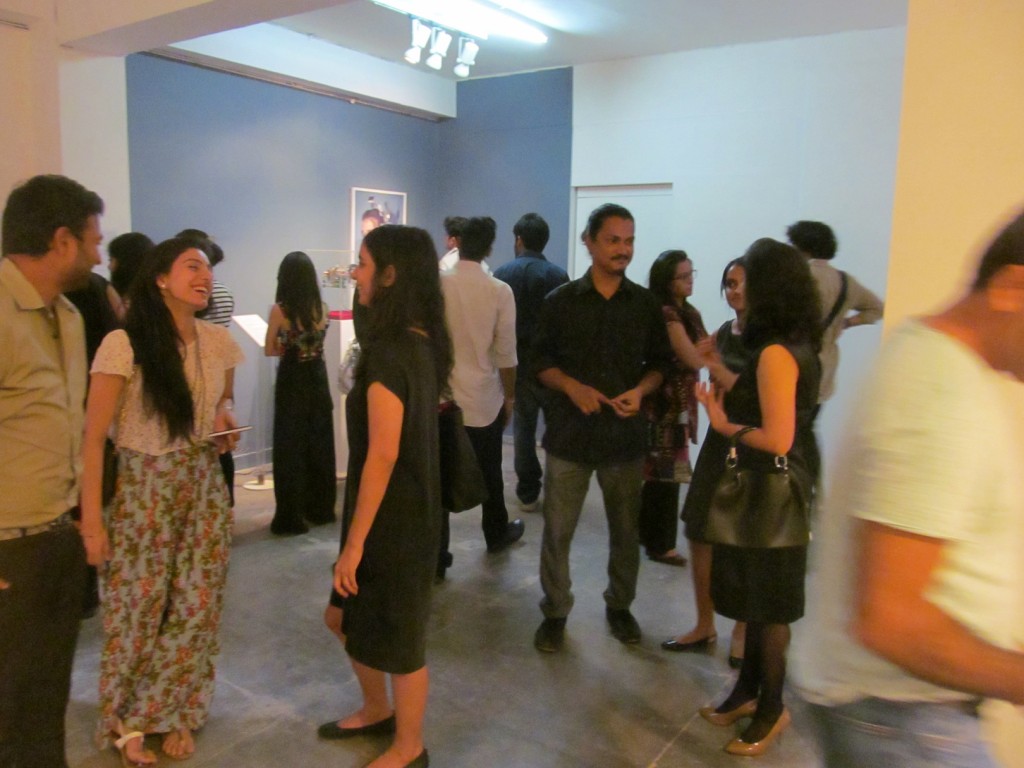 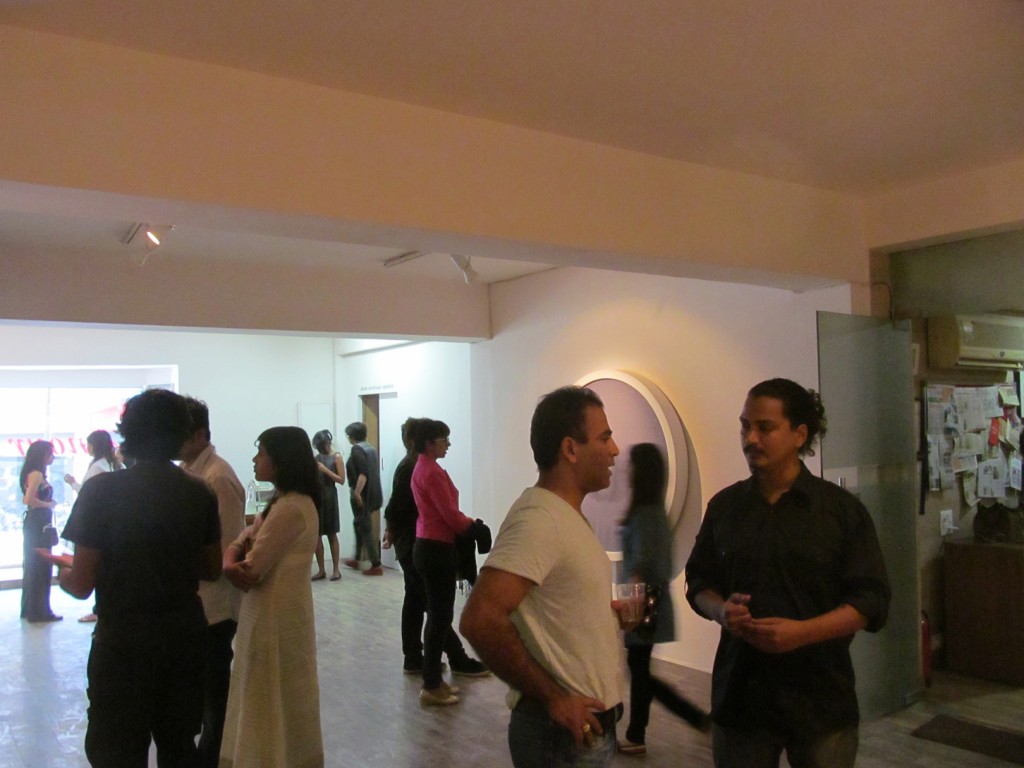 The event was like an intellectual rainbow – persuading you that this is someone you want to spend time with, hours of your time, the next two hours of your time. The audience were completely in tune Anubha and Deepjyoti’s conversation. Being the first edition of this event, Artsome is headed to a bright start with many more events being planned on similar lines in the future. Watch this space for updates on our calendar! Artsome Walks will be back again to made art more interactive and bring it to more people.