There are artworks that generate a sort of frenzy, a palpitating excitement and provoke viewers to gaze, analyse and ponder, and think hard. And then there are artworks that are so compelling, calming and meditative that they almost set a disturbed mind to relax, reflect and revel in the inner being of the spirit. 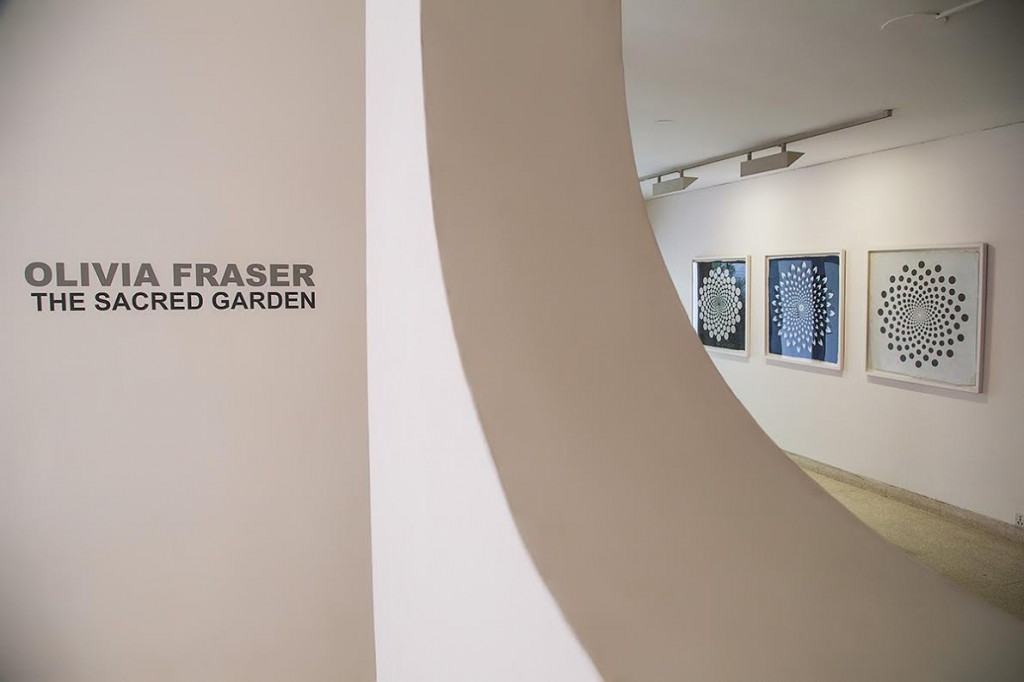 It is to Olivia Fraser’s credit that her collection entitled ‘The Sacred Garden’ is so pure and pristine that right from the title to each intricate detail in every piece, the work inspires a Buddhist-like composure. Most people know Olivia as the better half of acclaimed author and historian, the charming William Dalrymple, who having visited India a few decades ago, decided to settle here permanently. 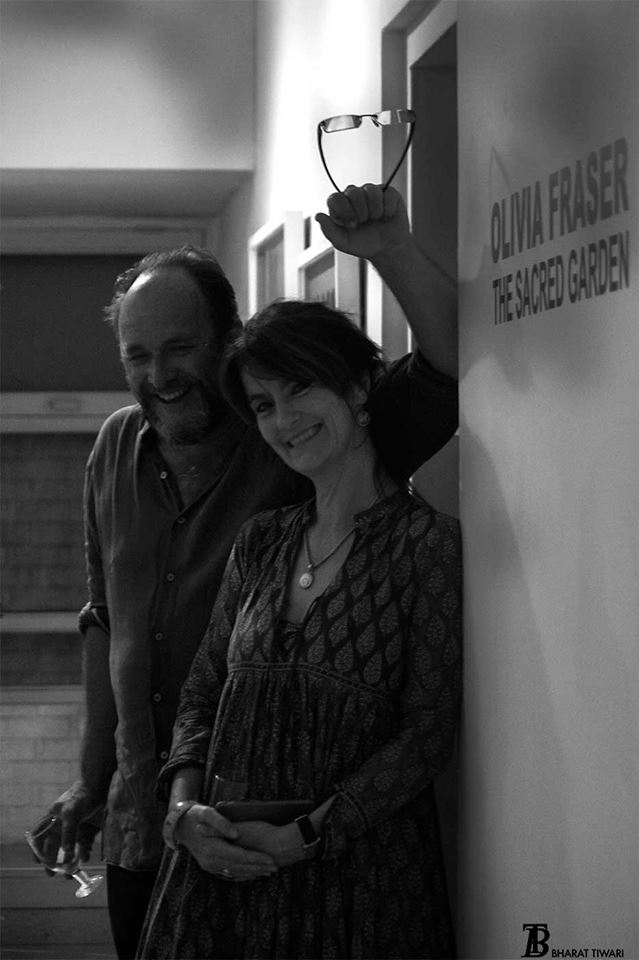 The fact that this endearing British couple have embraced a great deal of Indian culture and sensibilities is amply evident from their respective creations, be it William’s books or Olivia’s art. Right from deploying original handmade paper sourced from the Kagzis of Sanganer in Rajasthan to the organic colours and squirrel brushes that she uses to paint, her work is a complete lesson in the art and science of being 100% natural and eco-friendly. 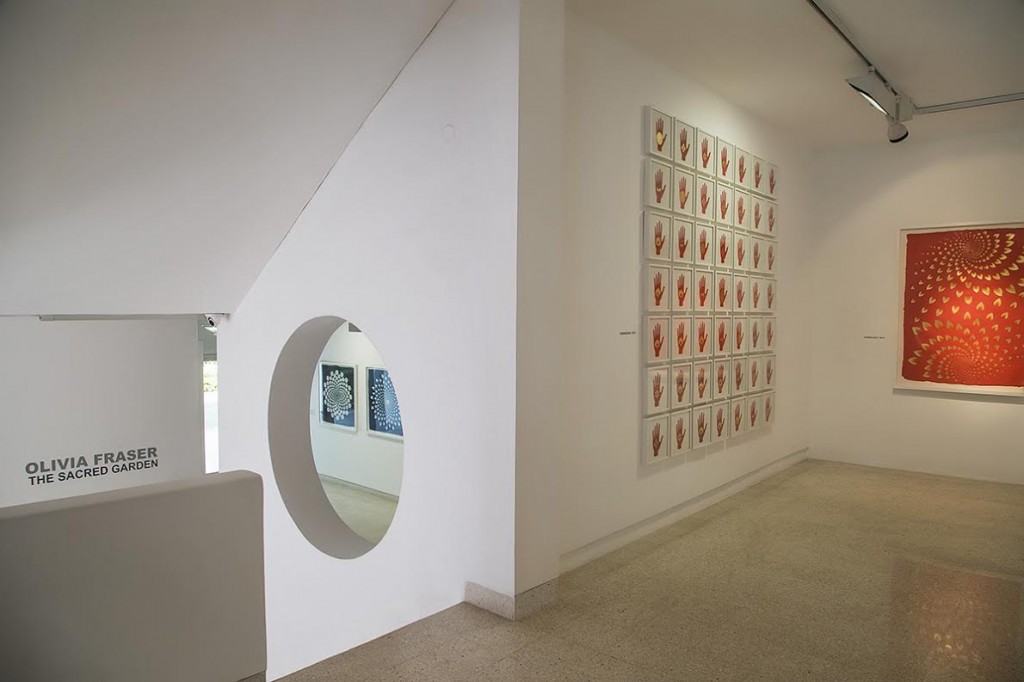 “The paintings in this exhibition developed out of my interest in and practice of yoga. Within Indian yogic tradition, the practice of meditation is rooted in visualizations, mainly from landscape, in particular lotuses and linking them with the metaphysical. There is a meditational journey to be undertaken with the sahasrara, or 1,000-petalled lotus (deemed the ultimate lotus), used as a visual aid in order to reach the absolute. I also use figurative imagery associated with bhakti or devotion – eyes, hands and feet – as a means of travelling through and engaging with this metaphysical landscape.”

Owing to her being hugely influenced by Yoga and Buddhist philosophies, she uses classic Indian motives such as the lotus, the hands, the eyes, and so on and inspired by the natural landscapes comprising of the seven seas, the mountains, the rivers and goes on to depict concepts such as the seven chakras; the pulse of breath, held in between exhaling and exhaling particularly during meditation where the focus is on the breath; the awakening of the kundalini; the half opened eye reminiscent of Buddha himself in meditation and many such icons. 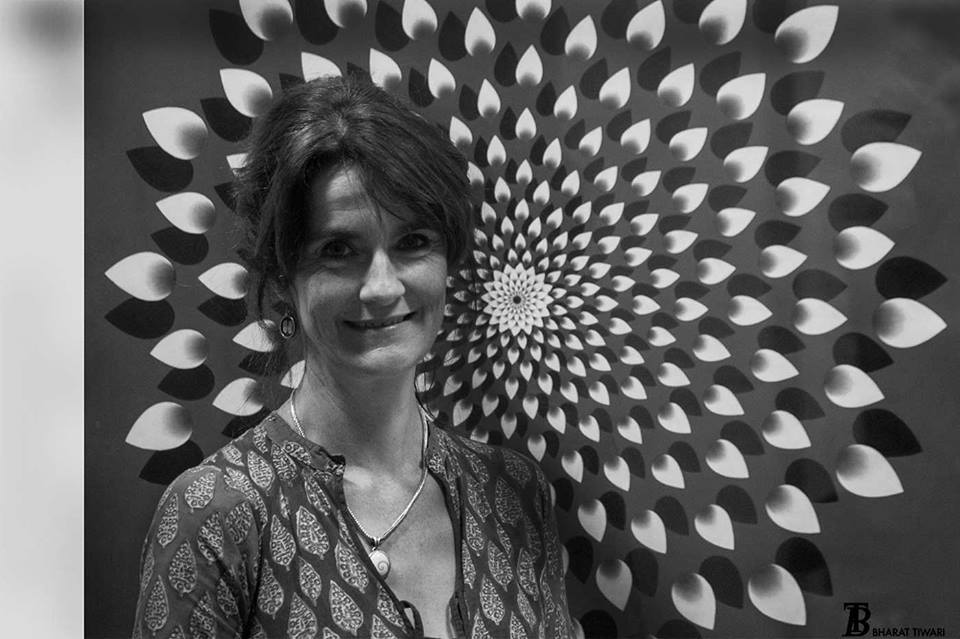 In her own words, her fondness and propensity towards “miniature painting (was discovered) when I first visited the National Museum in Delhi in 1989. I was thrilled by the gem-like colours, detailed brushwork, iterative patterning and burnished flat surfaces, but I was also attracted to the confidence of the iconography, the symbolism, the meanings behind the use of color, shape and infinitely fine line.” The deft use of the squirrel brush strokes to create minute patterns all converging to form a part of the larger canvas is simply breathtaking.

The series of ‘Breath’, ‘Breathe’ and ‘One Breath’ paintings, featuring a series of lotus flowers right from the bud to a fully opened blossom and back to the bud, akin to its movement in an actual day complemented with the rising and setting sun could easily be interpreted as the breath that is huge and minimal in different moments, whilst one is lost in deep meditation. 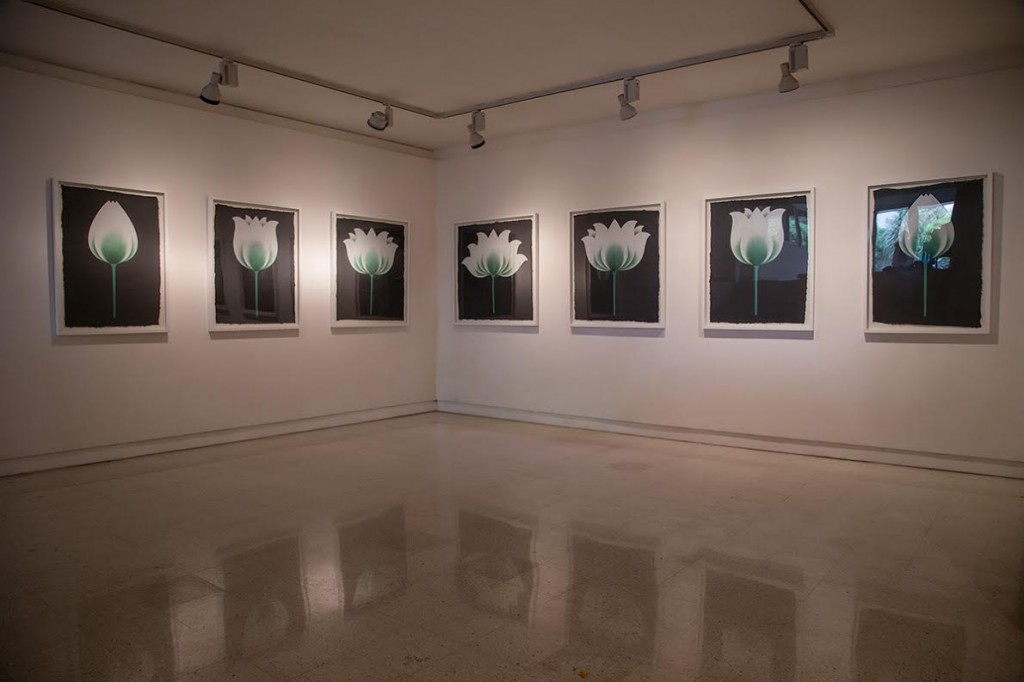 The journey towards the awakening of the kundalini in the piece entitled ‘Kundalini II’, starting from the Root Chakra and moving to the mind or brain is equally awe-inspiring as are the changing colours of the piece entitled ‘The Sacred Seas’, which start from dirty, muddy water that moves to different stages of cleansing until the water is still and crystal clear. 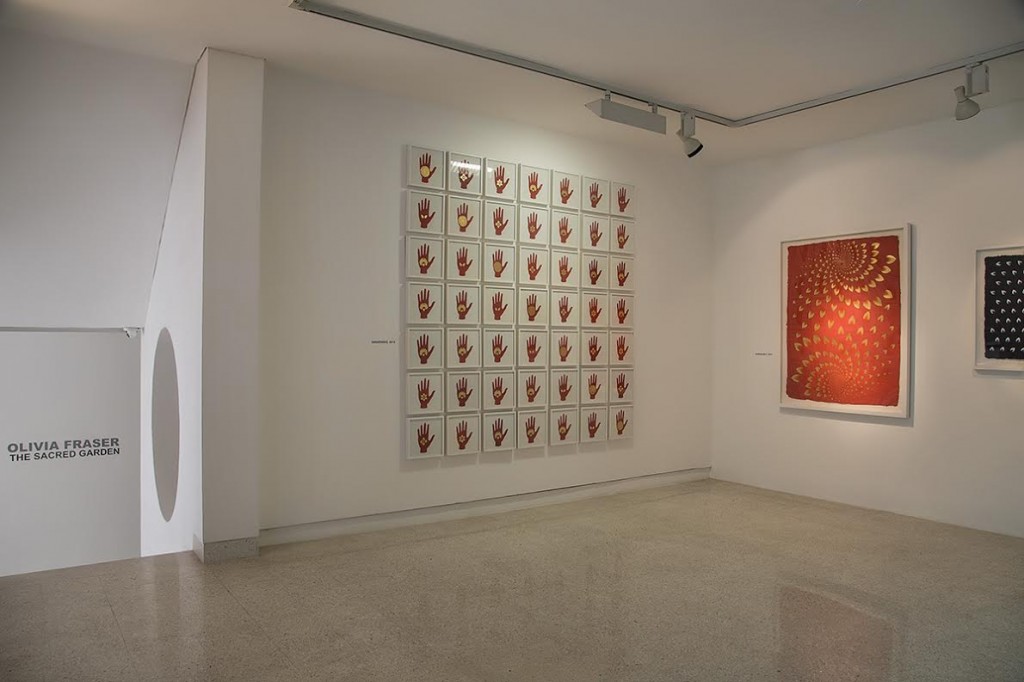 The ‘Chakra’, ‘Chakras’ and ‘Porous Borders’ focuses on the permeation of various chakras, depicted in colours associated with each and depicts the growth of a meditating individual from ‘without to within’ with much ease and alacrity. 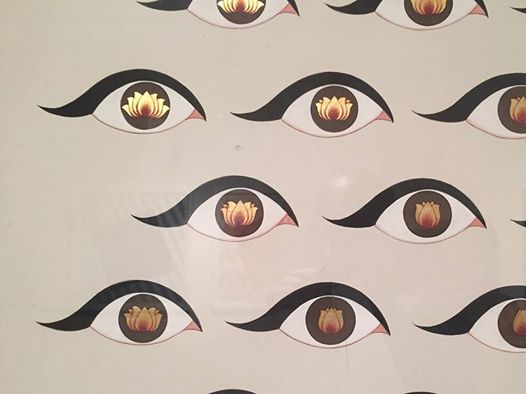 ‘Darshan’ series focuses on the light entering through the pupil of the eye and its reaction thereby, whilst ‘You are the Sun’ very clearly depicts the various stages of a lunar eclipse. Admirable are the deft scientific skills of the artist in ensuring a perfect symmetry between the waxing and waning faces of the sun. Deeply engrossing and interesting!

‘1000 Petals’ and ‘Yantra’ can be deciphered as the churning of the spirit and mind before attaining its calm. ‘Raslila’ beautifully incorporates the concept of Krishna appearing in infinite numbers in front of each gopi in Mathura and making love to her every night. The deft deployment of the colours denoting Lord Krishna, as in dark blue, along with his symbolic peacock feather is simply brilliant. 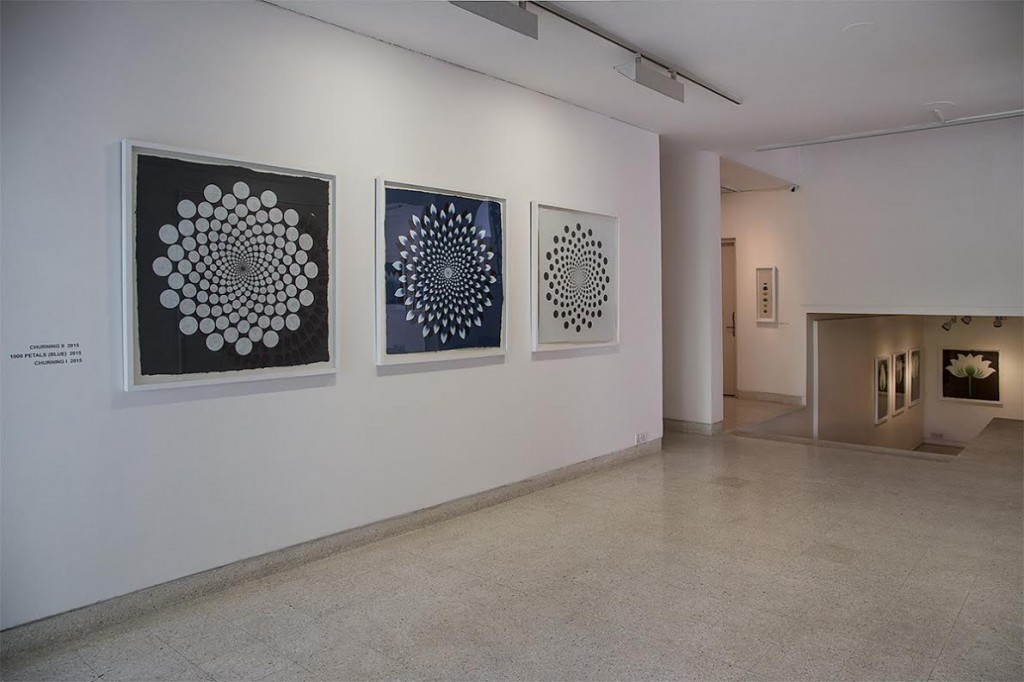 ‘The Triptych: Shiva Shakti’ can also be interpreted as the two dimensions of Lord Shiva and his feminine counterpart, Shakti or Parvati, without whom Shiva is incomplete and how the merging of these two gave birth to the cosmos. Differently, it can also be interpreted as a depiction of the divine trinity of Brahma, the creator, Vishnu, the preserver and Shiva, the Destroyer.

Deeply rooted in Indian mythology and the yogic teachings, ‘The Sacred Garden’ is an immensely personal experience that draws onlookers into its mythical and spiritual space.

As spiritualist Amit Ray simply states, “Meditation is a way for nourishing and blossoming the divinity within you.” ‘The Sacred Garden’ has the ability to nourish the soul and enable it to flourish to higher levels.

The show was previewed at the Nature Morte Gallery, A-1, Neeti Bagh, New Delhi, on 4-5 March before proceeding for ‘The Sundaram Tagore Gallery’ in New York, where it can be viewed from 7 - 30 April, 2016.