While Sir Peter Cook has achieved considerable success as an architect in the real world with many award winning constructions all over the world, we are discussing him today not because of them. Apart from his conventional work, he is also one of the founding members of Archigram, an Avant Garde group of neo-futuristic architects who conceive antiheroic and consumer friendly projects, but the only catch is that they are hypothetical and only exist on paper. Nevertheless, they represent the extent of human imagination depicting a glorious, utopian view of our future which may not be very far away. Even after more than five decades of inception, these ideas promoted by Archigram remain as intriguing, revolutionary and mind-bending as they used to be in the sixties. 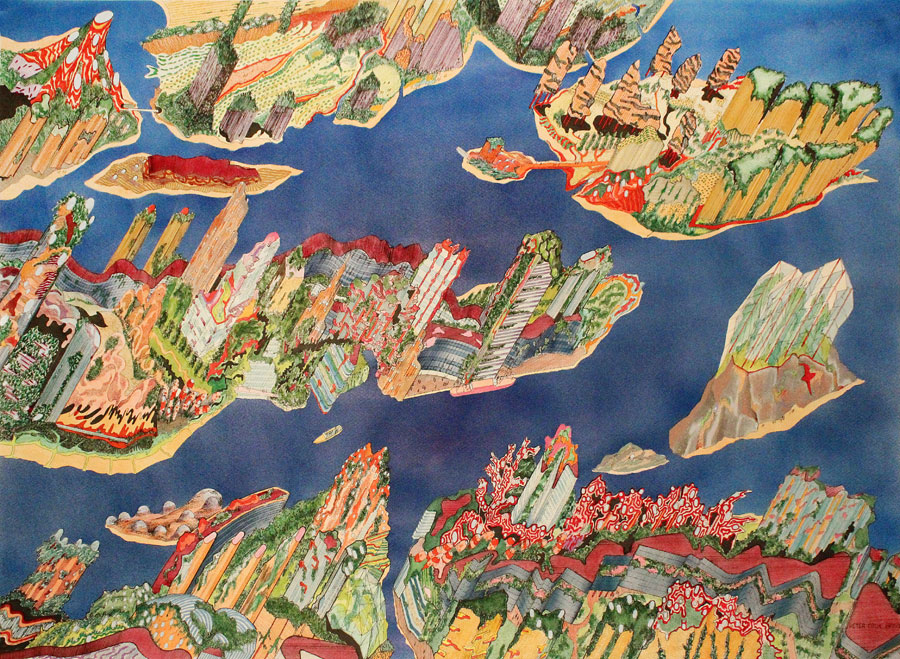 He does not lack any success in mainstream architecture either. He has won numerous awards and honours during his long career and his designs have also won many important competitions around the world. Kunsthauz Graz, Abedian School of Architecture, Berlin Lutzowplatz Housing, Vienna University of Economics and Business etc. are some major real life project undertaken and completed by the firm Cook Robotham Architectural Bureau (CRAB) which he co-founded. However, he is still better known for his hypothetical projects created as a part of Archigram. Gallery Espace at the New Friend’s Colony is hosting some of Peter Cook’s drawings and sketches from August 22nd to September 22nd. These works span from 1960 to 2000 and showcases the extent of imagination that he touched through his projects. There are 34 pieces on display and it is the first time Sir Cook’s works are being displayed anywhere in India.

One look at these works is enough to enamour any viewer with their futuristic charisma. However, Cook maintains that more than being futuristic the very idea of Archigram was developed to prevent modernism from stagnation and orthodoxy. It did not consider environmental or resource based considerations of present times and envisioned a future of interminable resources. Eventually this vision did succeed in creating a new generation of architects who could actually bring such projects to fruition. These radical ideas related to infrastructure are beginning to affect traditional urban thinking today. 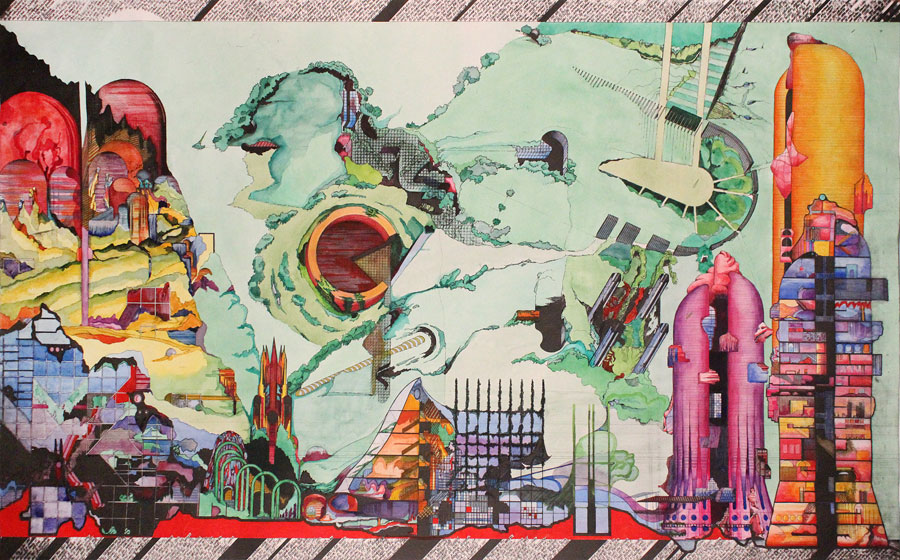 Cook’s works display a keen understanding of the metropolitan cities as well as the environments they are set in. Before drawing any of these sketches, he visits a city several times and spends a lot of time allowing a cultural response to develop in him with respect to the place. He draws from the experiences during his early life that enabled him to repeatedly get introduced to newer urban settings and pick up their respective intricacies. He not only focuses on the geography but also the culture as well as the demographics of a city. He understands the dynamics among different classes and all of this reflects in his apparently futuristic ideas. While the conventional “modernism” has become stagnated, he has been able to create a new language that will probably represent the next wave of modernism in the near future. 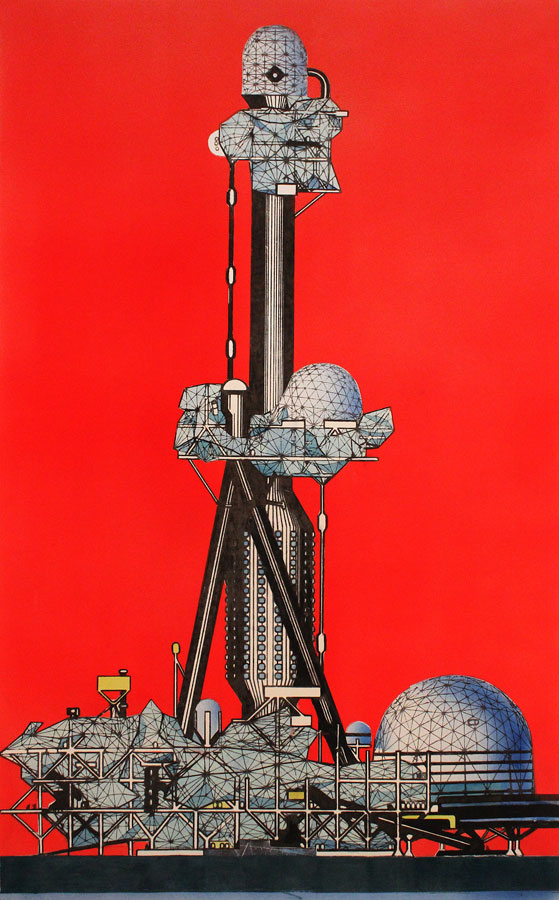 While all these projects are hypothetical, Cook admits that they are not entirely impossible to build. At least some of them are mostly buildable now with the advancements in technology. For instance, he has already built Kunsthaus, the modern art museum in Graz, Austria using similar designs. Originally most people were sceptical about it but Cook knew that it was only a matter of time before computers become affordable and their design and processing powers improve. He and his collaborators were vindicated eventually and the project was inaugurated 2003. So, all the sketches and drawings on display here can also come to life very soon. In fact, Cook has taken a lot of inspirations from developments that are already happening around the world. He often mentions how he admired the use of applied electronics in irrigation and vegetation control in Israel. Such radical technological breakthroughs might have upset a more conventional thinker but it only fires up the imagination of Cook who is a radical himself. 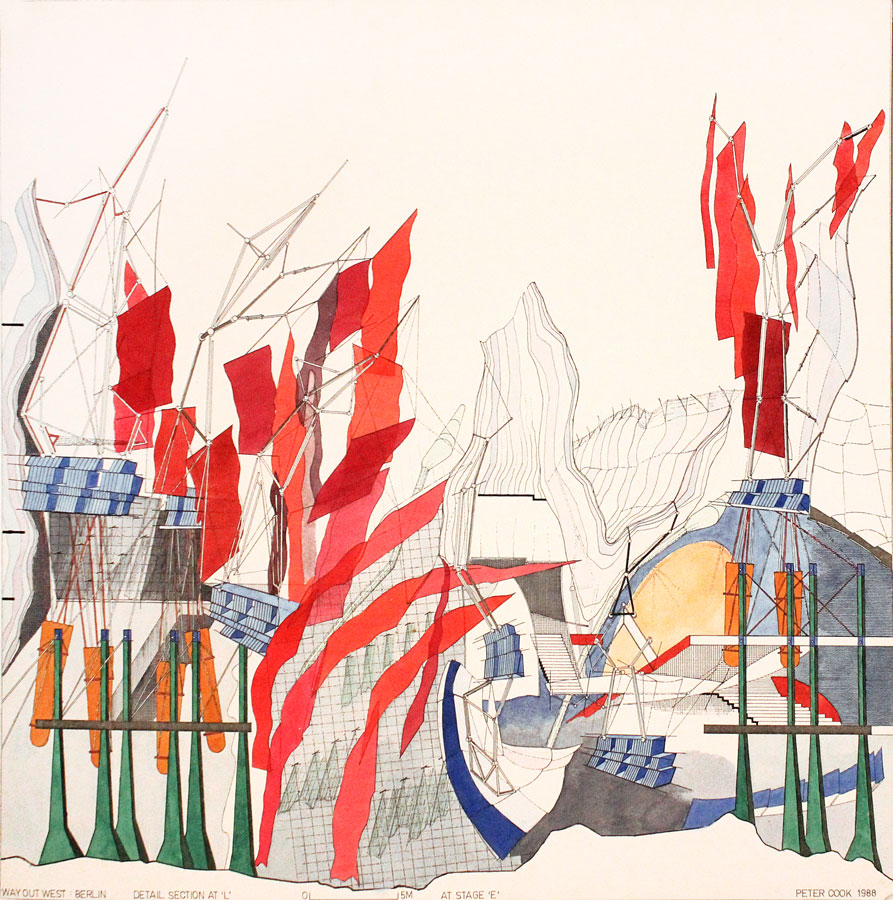 In a way, he is far more progressive compared to his contemporaries considering his early adoption of technologies. Although a little concerned, he is unafraid of excessive digital onslaught that is visible everywhere nowadays. He is open to any kind of technology till it helps him achieve his goals. This is what takes his ideas to an entirely different level and that is why they look inherently futuristic. He also does not enjoy excessive simplicity that passes of in the garb of minimalism nowadays. He loves complexity and infuses mystery through his vast knowledge and experience of diverse topics. 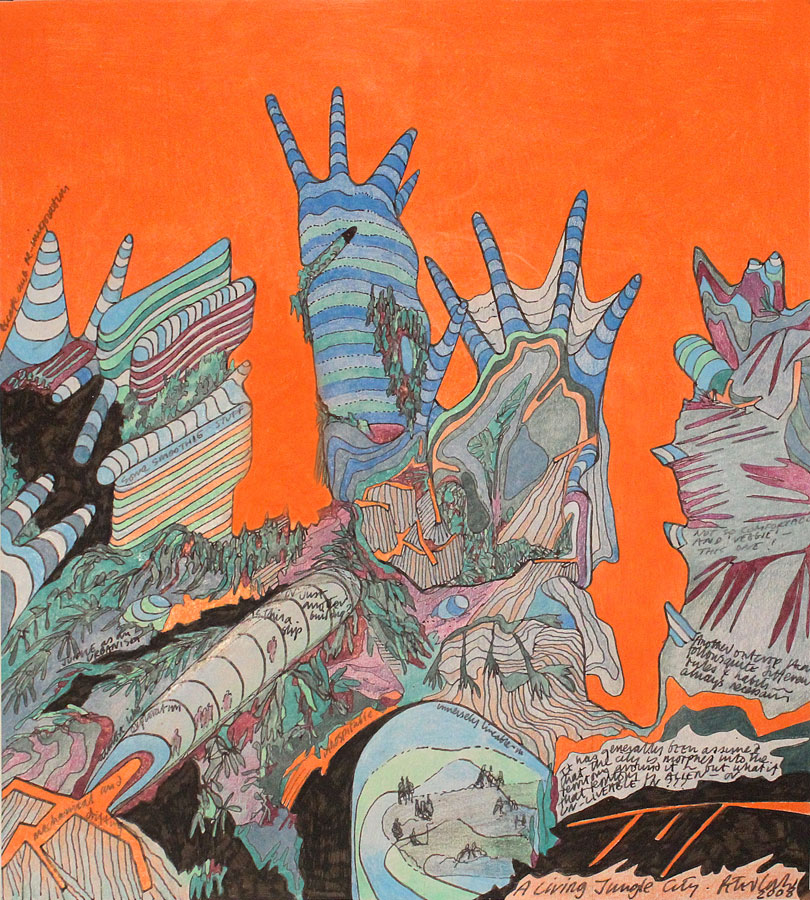 Some of the most notable works on display in this show include the likes of A Living Jungle City, which shows irregularly shaped structures cohabiting with nature, Way Out West Berlin that has fluid buildings that fuses the turbulent recent history of the city with the future and Montreal Tower, which was a commissioned project prepared for Montreal Expo. The last one drew inspiration from a large tree and was conceived as a colossal vertical tower that offers a wide range of activities to the visitors. There are many other city projects on display such as the Skywaft City for Frankfurt, which shows his way of planning futuristic ideas using a real city as the base. All other drawings on display also have interesting stories associated with them and the organizers have taken care to explain each and every one of them.

This exhibition is a must visit for those who intend to broaden their horizons and push their own imaginations beyond conventional limits. Do not miss it. It is not only about the architecture but about the possibilities of human spirit.