Art has always known to challenge the defined conventions. Across the history of mankind and the hat of art, there have been several art movements that have challenged the existing norms. It is through these ‘rebel’ artists that we get to see art in so many myriad forms.

One such movement, which challenged the modern art, is called Post Modern Art. This art form can be treated as a rebellion against the ideas and values of modernism, as well as a challenge to the modernism's dominance in art and culture in most of the 20th century. The term has a close association with ideas of skepticism, irony and critiques of universal truths and objective reality. 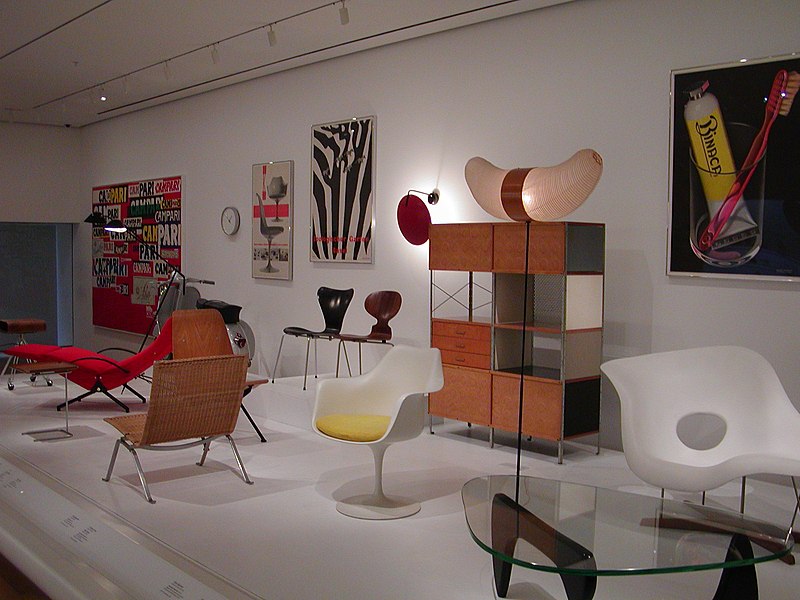 Chairs on display at MOMA in New York City. In the background Modell 3107 in black and The Ant by Arne Jacobsen.

Post-Modern art is a clear shift from the modernism. It is a body of art movements that sought to contradict known aspects of art, which became popular during or just after the emergence of modernism. The post-modern art involves movements such as intermedia, installation art, conceptual art and multimedia, particularly video.

While modern art believed in some universal principles or truths, which were formulated by religion or science. The artists believed that these principles could be used to understand or explain reality. Postmodernism challenged this very notion of universal certainties or truths. The postmodernism artists argued that individual experience and interpretation of this experience was more concrete than abstract principles.

Modernist artists believed that they could find a way of purely reflecting the modern world. And they advocated clarity and simplicity in their art. On the other hand, postmodernism artists chose to go with complex and often contradictory layers of meaning. These artists experimented a lot with materials and media.

The first signs of postmodernism were seen at the beginning of the 20th century when Dada artists challenged modern art due to their, what these artists called ‘anarchic actions and irreverent performances’.

However, the term did not become popular until 1979. It came to limelight when a great philosopher J.F. Lyotard's showcased his famous work ‘The Postmodern Condition’. The term was an answer to the perceived failures and/or excesses of the modernist approach towards art.

It is very difficult to define political art. Views on what makes art political can range from the

the idea that all art is political (i.e. it either implicitly supports or explicitly opposes the status quo) to pointing out, for example, the political murals on walls around Belfast. As a way of narrowing the former and broadening the latter I suggest here a view of political art that uses three categories: Portrayal, Promotion, or Projection.

During the late 19th century to early 20th century, the art was mainly defined by a utopian sense of progress and technological advancement, largely influenced by the industrial revolution and aspirations of modern life. Many artists, like Paul Cézanne and Piet Mondrian did extensive work in abstract art to find a universal means of expression.

Other artists, such as Salvador Dalí or Marcel Duchamp, who focused on more subjective and forbidden topics were seen as ‘rebel’ who rebelled against the progress and rationality. However, their revolutionary work became precursors to postmodernism. By 1930s, the process of painting, which was meant to depict a subject using lines and colours, became very important, so much so that it became the subject itself.

By the middle of the 20th century; the Western world had witnessed a huge paradigm shift. With 2 World Wars, the world witnessed an immense loss of human lives. Along with this, the communist ideology started losing its relevance and nuclear weapons appeared on the scene. Due to this, the modernist view of an optimistic world, that was prevalent before these world wars started looking irrelevant and outdated.

Europe no longer remained the centre of modern art. The world now started looking at New York City and to a new generation of artists, who rose to prominence in the post-war capitalist society. These young artists began to question modernism for its lack of relevance to the real world and the flourishing popular culture, where these artists came from. Motivated by a desire to create art that reflected common man and his daily struggles, some artists such as Jasper Johns and Robert Rauschenberg began to experiment with new styles that borrowed and recreated imagery from the popular culture and their surroundings. The approach was called Neo-Dada style, which initiated the post-modern art movements. These artists were influenced by John Cage, and many of their experiments would give rise to Pop art and Minimalism.

Post-Modern art is a certain shift from modern art. Though it cannot be described as a complete art movement, as it lacks definitive characteristics. It can be best understood as the style and attitude of some artists challenging the utopian approach of modernism. The revision of material and influences that feature are diverse and mark a certain departure from modern art. There is a sense of radical freedom provided to the artist who works with a certain history of the material and art itself. In the Euro-American sense, it emerged and developed with a lot of controversial elements in practice. The area of what is considered as art is also modified, in terms of not only aesthetic and stylization, but equally so of its ambition to be a work of art. Design, photography and video become an important aspect of art-making. The works of Pushpamala N, Thukral and Tagra are some Indian artists who have a strong sense of post-modern freedom in their works.