Impressionism, (Impressionnisme in the French language) is an art movement, which originated in the 19th century. This art style is characterized by the use of relatively thick and small brush strokes. This art style emphasizes ordinary subject matter, accurate depiction of moving light, and use unusual visual angles. These artists focused on capturing the essence of the object, as compared to the subject's details. These quickly applied strokes give a painterly impression of movement and spontaneity.

The term “Impressionism” was coined by well-known art critic Louis Leroy when he published a satirical review in the local Paris newspaper Le Charivari. For coining the term, he was provoked by the title of a Claude Monet work, Impression, Soleil levant (Impression, Sunrise).

The art movement, called Impressionism originated in the city of Paris, France. A group of young artists started adopting a radical approach towards painting and challenged the rules of academic painting. The founding members comprised Claude Monet, Edgar Degas and Camille Pissaro. The group's unifying factor was its attempt to gain independence from the official annual Salon', the conventional art community in France where a jury of artists from Academie des Beaux-Arts selected artworks to award metals to. The name of the style is derived from the title of a Claude Monet work, 'Impression, Sunrise' that was exhibited in 1874 in Musée Marmottan Monet, Paris when the critic Louis Leroy accused it of being a sketch or "impression," and not a finished painting.

These artists started experimenting with short "broken" brush strokes of mixed and pure unmixed colour. Unlike the traditional approach, these colours were not blended smoothly or shaded to get the desired intense colour vibration. For painting, they preferred the use of freehand brush colours overuse of geometric figures, lines and contours. Until now, the artists used to mainly paint landscapes and portraits of elite people, usually inside a studio. However, this new generation of artists started painting more natural and realistic scenes from modern life. These artists realized that they could capture the moving effects of sunlight by painting outdoors. Hence most of the paintings were done outdoors.

Claude Monet, Impression, soleil levant (Impression, Sunrise), 1872, oil on canvas, Musée Marmottan Monet, Paris. This painting became the source of the movement's name, after Louis Leroy's article The Exhibition of the Impressionists satirically implied that the painting was at most, a sketch.

The earlier artists faced a lot of opposition from the traditional art community in France, who made fun of their ideas. It was during the years of 1870 and 1880 that these artists came into the limelight when they organized their independent exhibitions to exhibit their work. This movement which first started in visual arts later moved to other media, such as music and literature, and went on to be called impressionist music and impressionist literature, respectively. 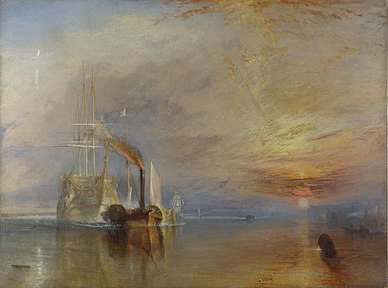 M. W. Turner's atmospheric work was influential on the birth of Impressionism, here The FightingTemeraire (1839)

Over time, the art lovers realized that these Impressionists artists have caught hold of a fresh and original vision towards the painting. They started liking their work, even though the art critics and art establishment disapproved of this new style. However, with time the art style evolved and also went on to become a precursor of various painting styles, including Neo-Impressionism, Post-Impressionism, Fauvism, and Cubism.

The main idea of the artist practising Impressionism was to capture a realistic view of life, away from conventional paintings of landscapes and portraits. Some of the major characteristics of Impressionism are given below.

Impressionism is perhaps the most important movement in the whole of modern painting. This movement emerged in France, when many other artists, including great Italian artists, were also exploring open-air painting. The Impressionists, however, developed new techniques specific to the style. The style emerged as a movement when a group of artists called the Anonymous Society of Painters, Sculptors, Printmakers etc. organized an exhibition in Paris in 1874.

The characteristics of impressionist artworks include the prevalent use of moving light and its reflection, hastily painted surfaces or the illusion of quickly painted surfaces, dots, dashes, commas and short brushstrokes, and the separation of colours to let the eye's perception mix them. Most of them take modern life as the subject matter. Famous artists apart from the founders include Berthe Morisot, Mary Cassatt, Alfred Sisley and Gustave Caillebotte.