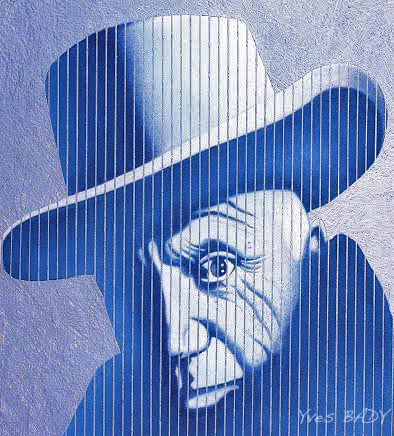 Self portrait by Pablo Picasso

Figurative art is also known as ‘figurative’ is artwork that is derived from a real object source and is representational. The terms have been used increasingly more since the arrival of “abstract art”. Figurative art is when an artist retains aspects of the real world in his or her subject matter.

Since abstract art made an entrance the term figurative art has been used to refer to any and most forms of modern art that hold a strong reference to the real world. Paintings, sculptures, etc. can all be divided into categories of figurative art- representational and abstract.

Figurative art is dependent on a few formal elements that create aesthetic elements and effects; these include line, shape, colour, texture, perspective and play of light and dark. Although these elements can play a key role in creating any form of imagery- abstract or non-representational or two-dimensional artwork, the key difference is that in figurative art these elements are deployed to create an impression or illusion of form and space and to create a sense of empathy in the narrative that is being portrayed.

Figurative art is based on the tacit of understanding abstract shapes as one can see in several sculptures of Greek antiquity the bodies were not naturalistic but idealized and geometric forms. From the early Renaissance, Mannerism to the Baroque- right through the 18th, 19th and 20th century, figurative art has broadened its horizons manifold.

Picasso after the 1920s can be seen as a great example of modern figurative art paintings, along with Alberto Giacometti from the 1940s, who was a great figurative sculptor. Post the Second World War, figurative art can be traced through the works of Francis Bacon, Lucian Freud and many others at the School of London, through the eras of Pop art, neo-expressionism and other sister movements. An important landmark in the evolution of figurative art is the first known nude painting in the Western world- Sleeping Venus by Giorgione. It was the first time the female body was introduced as a subject.

Therefore, it can be concluded that figurative art is that artwork whose goals are based on imitation or realistic representation. In ancient times, this was known as mimesis. Despite having the main goal, figurative has gone through periods of its own where artists have striven to create an effect of illusion that seemed to exceed the real. Other times they have striven for social reality. In the 20th century, the opposite of abstraction is best thought of as figuration.

Photography is often blamed for the disappearance of figurative art in modern paintings but that’s not true, it had to do more with the fact that artists wanted to push the envelope when it came to self-expression, experimentalism and avant-garde urges. Though figurative art was not dominated in the 20th century it did in the previous times. It acted as a key art form to two styles particularly- social realism and expressionism. Social realists used figurative art in an attempt to accurately record contemporary social life, while expressionists used figurative art to celebrate human yearnings and anxieties and understand them better.