The Bombay Progressives Artists Group (PAG) came into being soon after independence with six artists- F. N. Souza, S. H. Raza, M. F. Husain, K. H. Ara, H. A. Gade, and S. K. Bakre. They are known best for combining Indian subject matter with new artistic techniques, such as post-impressionism, cubism and expressionism. The concept of Progressivism emerges from the Age of Enlightenment in Europe and revitalized during the Industrial revolution claiming that industry, science, economic development and social organization were critical to human existence. Thus we can see from the manifesto of the Bombay Progressive group that they imbibed these ideals in their own practice to free the artistic community from the sophistication and pretension, in other words from the nationalistic colors of the Bengal School. The tremendous fervor that defines the post-independence period in all spheres economic, political and social encouraged the reorganization of the cultural sphere too. Inspired by the Progressive writer group of the 1920s, PAG tried to overcome historicist tendencies and institutional conservatism in art. The critic, Rashid Hussain spoke about the need for newer artists to create patronage for art through deliberate social purpose in their art. They took on a Marxist, anti- imperialistic worldview for ‘bridging the widening gulf between the artists and the life of the people’. 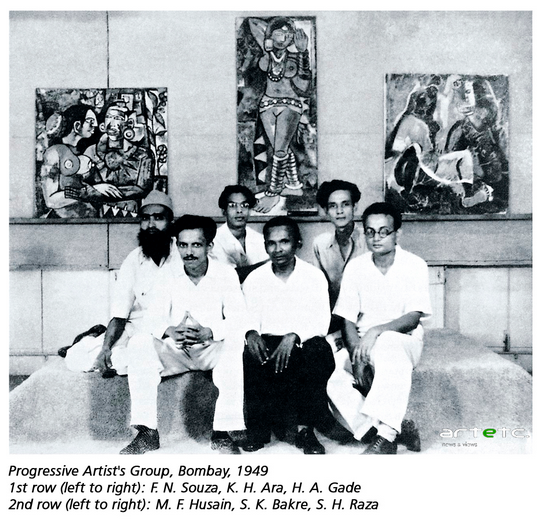 The oldest member of the group Krishnaji Howlaji Ara (1914 – 1985) started his painting career when he was ‘discovered’ by Rudy von Leyden and then Walter Langhammer while he worked as a car cleaner for a Japanese company. His water color paintings depicted wine glasses, landscapes, still-lives, earthen pots, grapes and pineapples. His watercolor and gouache paintings had a look of oil paintings like the folk and native tribal art styles. But he is known best for his paintings of the female nude in a naturalistic style, which has got both the appreciation and criticism of critics for being poorly executed and not referenced from life.

Francis Newton Souza (1924 – 2002) His repertoire of subjects cover still life, landscape, nudes and icons of Christianity, rendered boldly in a frenzied distortion of form, resembling the Art Brut movement. The loss of his father and sister very early on in his life played an important role in his life and works, so that they are grim and ridden with an ancient guilt, such that in all the landscapes, there is a feeling of desolation and of cities being deserted and of sexual tensions in male-female relationships to suggest exploitation and conflict.

Syed Haider Raza (1922-) evolved various styles of painting beginning with expressionistic landscapes to abstract ones, but with a fluidity of Indian watercolor painting. In the early 1940s, he moved to painting the ‘landscapes of the mind’. In1947, he lost his parents and his brothers moved to Pakistan during the Partition. Soon after, he moved to Paris, where he was struck by the Western modern painting styles and adopted expressionism and finally settling on the the use of Tantricism in his paintings. He is best known for his painting of the Bindu, which represents the concentration of all energy. Other symbols include the serpents that have always represented fertility in ancient Hindu mythology, Tribhuja (triangle) representing the cosmic balance and the rudimentary lines that seem raw and unfinished since they give a feeling of motion and energy associated with tantra.

Maqbool Fida Hussain (1915-2011) is probably the best known artist of the PAG as well as of Indian modern painting. Known as the Picasso of India, he introduced India to the most authentic flavor of cubism in his paintings of diverse moods and themes. He painted in series on themes such as Mother Teresa, Mahabharata, Ramayana, British Raj, Mahatma Gandhi, and Bharat Mata. Despite wanting to stay away from controversy, he ironically found himself engulfed by it, over his depiction of Hindu goddesses and Bharat Mata in the nude. He received death threats from right-wing Hindus and he had to finally flee to other countries for safety and just before his death received citizenship of Qatar, though he longed to return to India.

Hari Ambadas Gade (1917-2001) is considered to be one of the first abstract painters of post-independent India, often known as the ‘painter of painters’ because of his vibrant use of colors, which assume the primary focus, while subject matter becomes secondary. He painted landscapes, including those of Mumbai, Kerala and Udaipur. He strove to break the colonial hangover of academic art styles in order to establish an unconventional and dynamic style. In the late 1950s he established the Bombay Group of Artists after the dissolution of PAG in 1956.

Sadanand Bakre (1920-2007) was the sixth member and the only sculptor of the Progressive Artist’s Group. He employed techniques to meaningfully distort form and color in both his paintings and sculptures. He is famous for contributing to the concept of independent imagery in Indian art, which was divorced from the traditional style of adhering to realism. He worked with metal shaped in creative angular formations that were inspired from emotion and experience. His opinion, criticism and scrutiny was important for the growth and discussion of works of other members of the group. 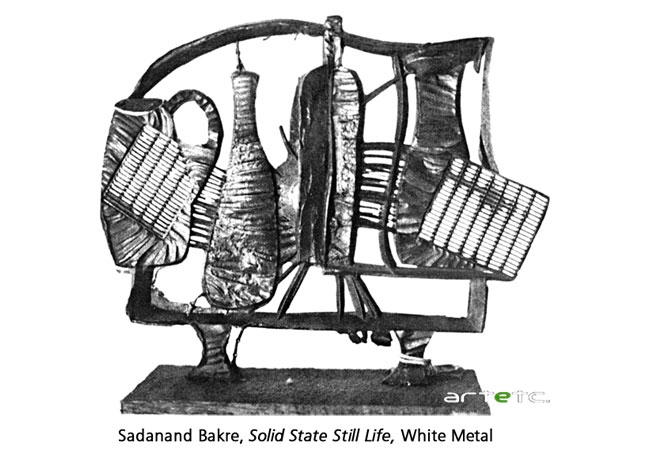 The Bombay Progressive Artist’s Group was based on mutual respect and adulation for the same basic principles of breaking free of the colonial hangover to install an ideology of dynamic worldly thinking.