Rameshwar Broota’s retrospective at Kiran Nadar Museum of Art, Visions of Interiority: Interrogating the Male Body is his meditation on the multiple realities of the human male form and its extraneous as well as intraneous influences for over five decades. Seeing all his works together in one curated show is an overwhelming experience, and that is why a visit to the museum while the show is on is recommended.

The exhibition has been curated by Roobina Karode, who gathered over 50 years of work by Broota for the exhibition. The artworks have been laid out in a way that it seems to bring together comprehensively the multi-layered narrative that Broota drew, while emphasis on the male figure that is the central protagonist to this tale remains a constant. In the curator Roobina Karode’s words, “The exhibition highlights the seminal shifts in his practice — from social satire to quiet introspective themes, bright colours to a monochromatic palette, and from the body to its fragments and counterparts. Using his own body as a terrain for merciless explorations of the self, Broota arrives at his ‘visions of interiority’.” 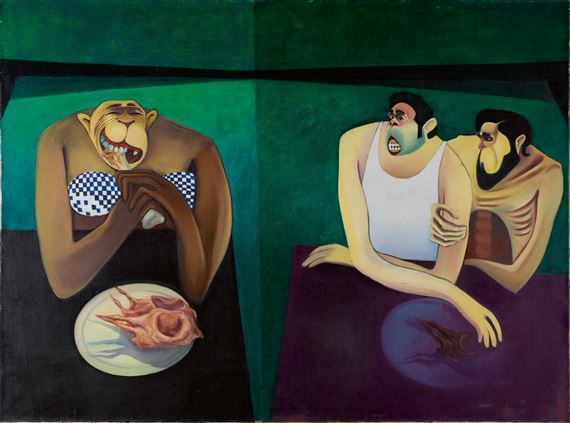 Rameshwar Broota, Anatomy of That Old Story, 1970, oil on canvas

Broota’s inward journey is a troubled one of vulnerabilities, it is not the public front of the human male body. As he works from canvas to canvas, he strips down the public façade bit by bit, till every canvas is a hint, to a larger question. And in that sense, Broota has been successful. His 30 years study of the human body is bereft of any hubris that reflects the inner anxiety of the male anatomy.

The “man” who is the muse here, has a fluid identity across his canvases. While some are incredibly intimate portraits that the artist has invested himself in, there is an obvious distance in others, where he views his subjects from a distance, Broota’s brush unmistakably  ridiculing them at their worst. The repeated reference to the ape-man falls in this category, placed ironically in contemporary situations, on a sofa for instance, with his arms linked with another man in an archetype everyman posture. The piece in question is titled The same old story – II. Here, the two chimpanzee men have affectionately put their arms around each other like comrades in arms. Sitting on a sofa, expressions of recognition and harmony mark their face. Diagonally opposite to this is a canvas titled Collected and Pooled , a work that  Broota had completed in 2003. The canvas is a mid shot of a male torso that has got its head hung, as an intricate maze of fingers remain clutched behind the bare back. Emotion narrows down to the structured closed fists, and the clenched butt, revealing tension and trepidation. Both the canvases are poles apart from each other in characteristics, and if you are looking for a common thread in all his pieces, considering they all use the human male form as a site of investigation, you will be surprised to find that there aren’t any. Broota’s works from the year 2000 onwards is preoccupied with the human body’s encounter with industrial objects. The human body is enlarged and taken out of context and parts of the anatomy are juxtaposed in claustrophobic positions with large metallic monstrosities. The effect is depressing, the steely coldness suggested by the strong lines of the objects, the hollow metals exposing the inadequacies of the human body in asserting themselves. The theme of vulnerability follows through, a metaphor for the world that is so full of man-made constructions that it has left no space for human bodies to breathe in.

A lot of his works are dream-like in character. Neither grief, nor rage, nor disgust – a work of art that Broota completed in 2005 has an old man peering into the other half of the canvas, his expression dejected, to the point that his drooping eye bags teem with it (Broota is nothing if not a master at expression). What the old man sees is his own enlarged reflection, a close-up of his eyes right up against metal, while a broken chain link pushes into his eye. This dystopic vision is even more dramatic seems like a film still and is more effective seen on canvas, emphasizing its vision many times over than a film clip would have.

The Traces of Man – Unknown soldier II is another such artwork. This intricately painted canvas has the outline of a soldier’s profile, his helmet that looks rusted from afar – and like an old beehive at the same time from up close. A belt with a prominent buckle that is the only non-rusted part of the whole piece stands out in comparison to the grey-brown profile of the soldier. The belt has gone diagonally  across the soldier’s face, connecting the vacant face to the helmet purposefully. The restraint that the human body undergoes is again through an industrial object, a foreign body that invades the space of its existence. A range of oil paintings explore inner expressions of the body in Broota’s works. Metamorphosis vi (1996) is such an art work done in grey scale, where the ribcage spreads with thin strains of veins like tendrils flowing around it. The huge artwork has been made combining three canvases,and one red streak (perhaps depicting consciousness?) flows through in this maze of root-like veins. The painting is fluid and dream-like in its character, the innards of the human body has metamorphosed in this public viewing, and their mobility giving them expression.

Broota’s interrogations within are not a single thought process but a stream of consciousness that ranges from satire to quiet contemplation, desolation, to curiousity about the human body’s level of resistance. The canvas, in sync with its auteur’s thoughts, changes colours, forms and expression.