Exploring the National Museum is a truly gratifying way to experience culture in all its profound glory. Every step you take gets you closer to the remnants of civilisation swathed in timelessness of memory. It incites in us an innate curiosity to learn through the joy of a shared experience by engaging all the senses.

The Vintage Islamic Calligraphy Exhibition was inaugurated at the National Museum on 15 May by the Union Minister of Tourism and Culture, Mr. Mahesh Sharma, coinciding with the concluding date of another phenomenal show of India’s biggest tribal Santhal community. A curated walk was organised on the day of the opening preview with the National Museum curators for Decorative Arts, Dr. Anamika Pathak and Zahid Ali Ansari, and was well attended by a diverse array of visitors. It provided the visitors with an opportunity to tour the exhibition with guidance from trained professionals who walked us through the archives.

Calligraphy, the fancy lettering of the script is one of the most important aspects of the Islamic culture as it was first started with the writing of the Quran in Kufic script in Arabic language. With the expansion of Islam, calligraphy also reached other parts of the world where it flourished in different ways.

The exhibition comprises of a unique display of 56 utility artefacts with tastefully done inscriptions on metal ware, wood, textiles and semi-precious stones, belonging to the museum’s own reserve collections. It highlights the aesthetics of calligraphy and craftsmanship with beautiful inscriptions across various mediums like metal pen-cases, bowls, plates, alam, wooden box, jade, mendicant bowl, textiles and costumes, where words are not confined to paper and architecture. 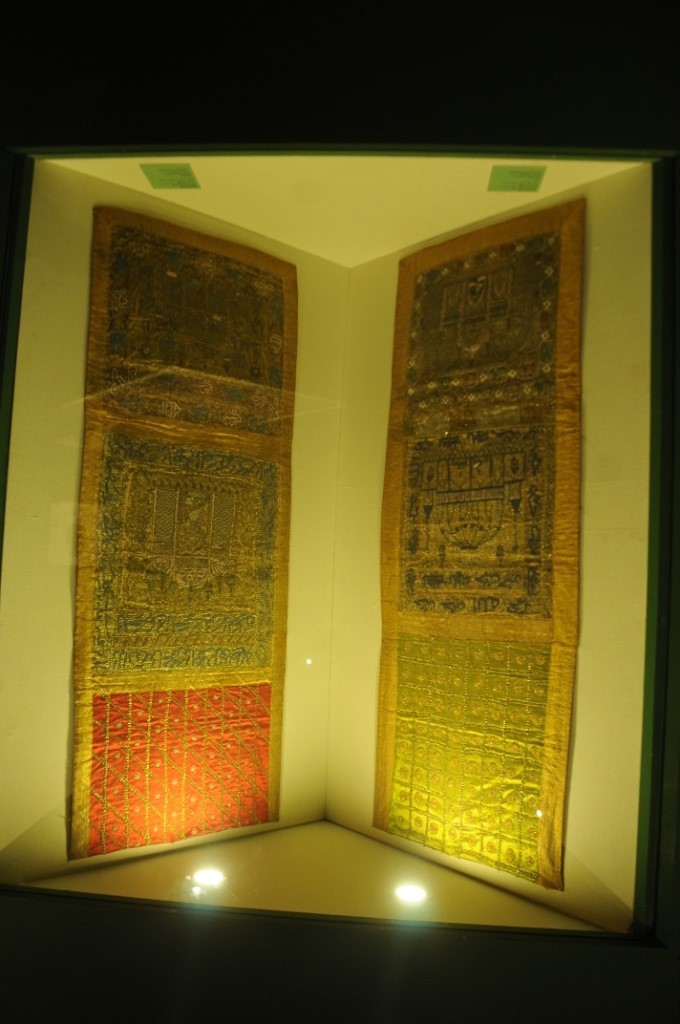 It is the uniqueness and flexibility of Arabic lettering that encouraged calligraphers to introduce various scripts and different mediums. Kufic, Naskh, Nastaliq Tagra and many more scripts were used to decorate the manuscripts and objects, which is the focus of the exhibition.

The selected artefacts have been meticulously studied, analysed and arranged in 5 major groups as writing implements, religion, tradition, faith and trade.

The beginning of the exhibition displays the various writing tools that implemented the intricate art of calligraphy – pens, pen cases, scissors, emphasising on not merely the objects but the process behind creating these beautiful artefacts. 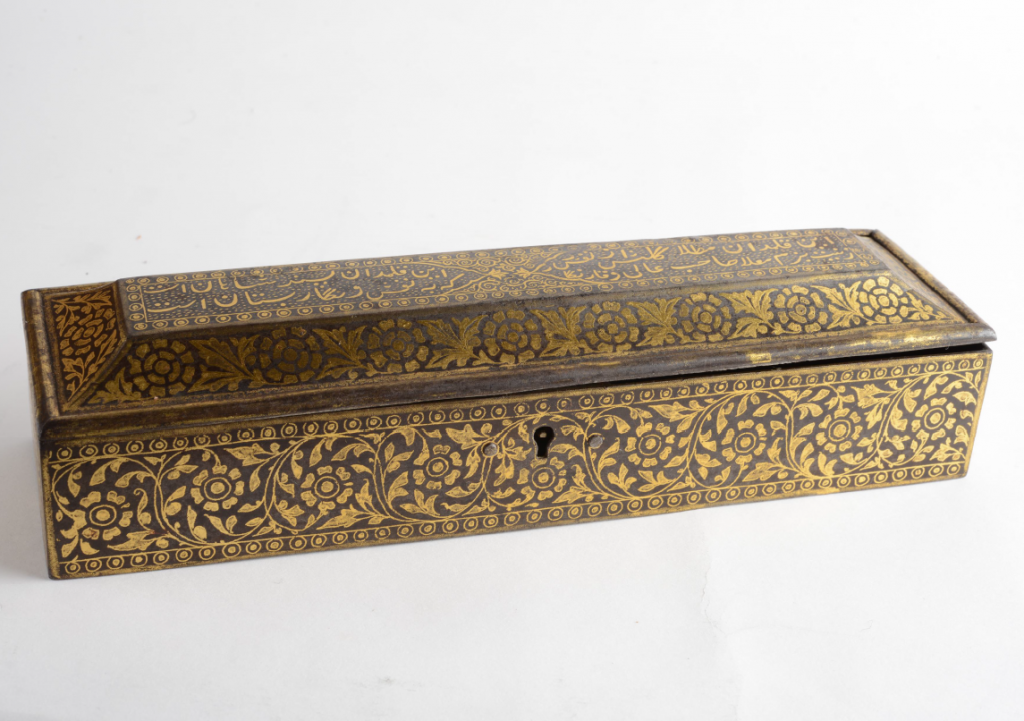 Alams, jewellery, prayer carpets, textiles and costumes are among the various artefacts that were used for religious and ceremonial use. Most of the artefacts are embellished with exquisite surface ornamentation aesthetically blending with flora-fauna design. Different decorative techniques have been used for the objects such as koftagari or damascening, bidri, niello, engraving, writing, printing and embroidering on textiles. It gives us great insights into the aesthetic taste of the users and the artistic skills of the manufacturers while taking us back to its authentic history. Dr. Naseem Akhtar, an authority in Arabic Persian language has transcribed all the inscriptions. 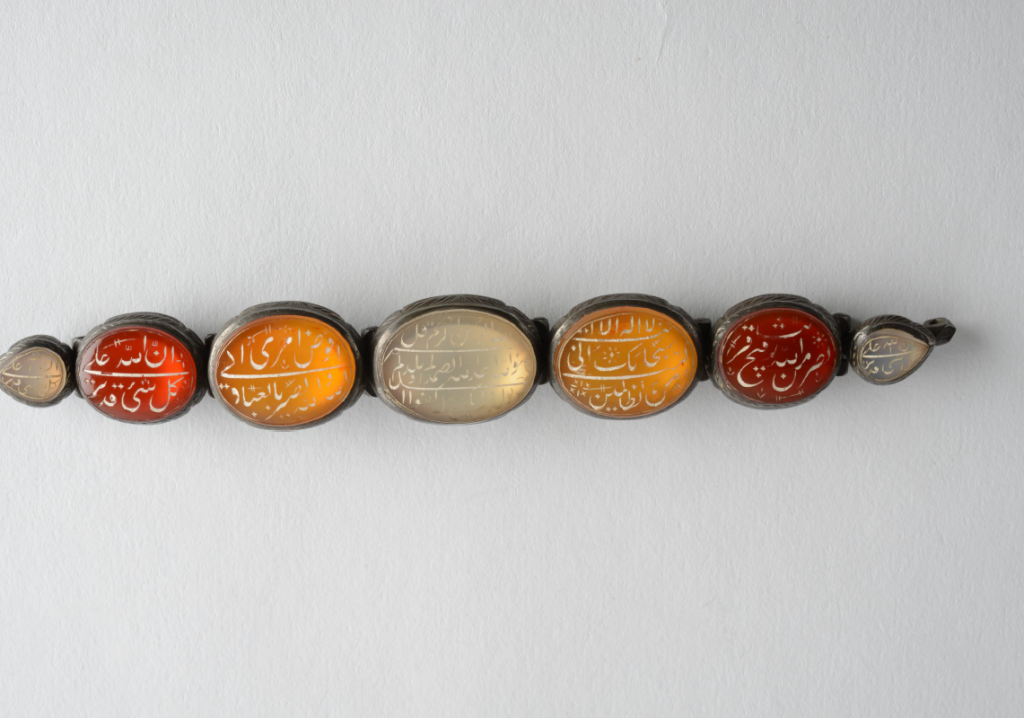 Handwritten Holy Quran verses have been inscribed on various costumes and textiles reflecting the significance of Islamic faith and religion and the language which started with the Quran and spread to the common man.

Artefacts like drinking vessels, bowls and plates were used to carry out the tradition of making religious offerings which were made by holding the plate on the head, a tradition which is still prevalent in parts like Ajmer. They were also traded for various religious and ceremonial purposes. 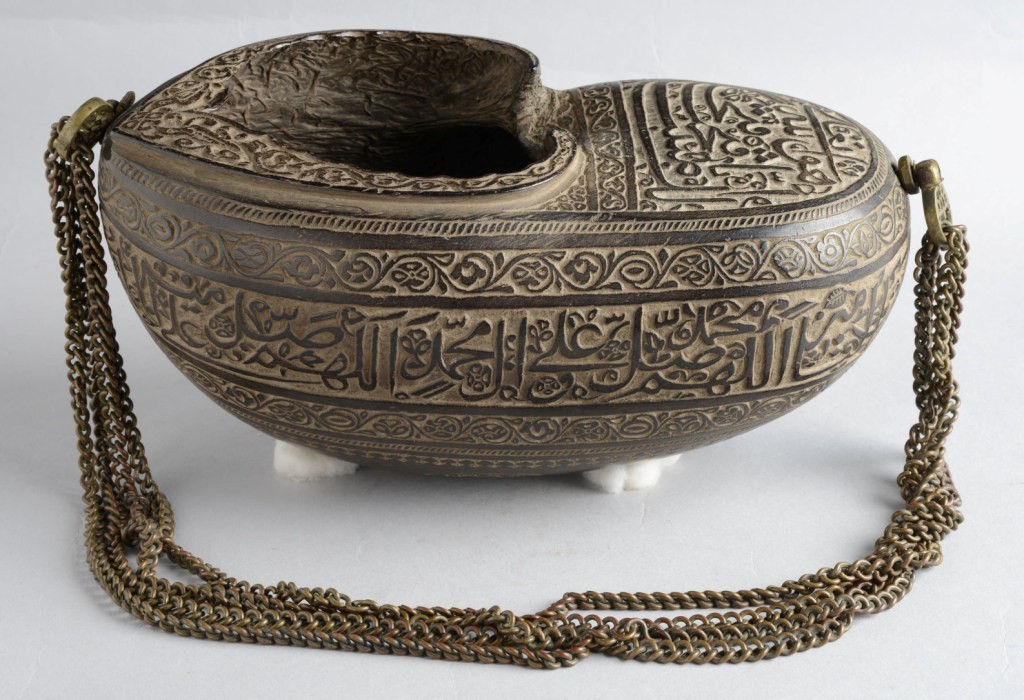 There is a brass shallow bowl on display, the oldest of the artefacts from circa 1495 CE, which belonged to Sultan Sikander Lodi who ruled Delhi for 28 years from 1489. It is the oldest among the objects and mentions the name of the calligrapher, Mohmood Bin Mahammad Bin Haji Mahmood Farsi., making it the one of the most valued artefacts.

On display also is a Brass globe belonging to the period of the Mughal Emperor, Shah Jahan (1627-58), which makes a mention of the maker’s name, making it another highly valued and historically important artefact.

It is interesting to see how various artisans have adopted different methods of illustrating the inscriptions with special care and aesthetic qualities on these decorative objects. It is the appreciation of the art of calligraphy in that era which led to the production of such a large number of works. It is also interesting how daily objects of utility are aestheticised and beautified.

A second curated walk was also organised following a 3 day children’s workshop amid the exhibition where they got the opportunity to learn and get hands on experience from skilled experts. It was a basic introduction to the concept of the fine art of writing, since it takes a lot of training to master the art to perfection in such a short span. The students for instance learnt how to carve ‘Alif’, the first Arabic word.

While it was not easy to get calligraphers to lead such ventures as it is a dwindling community, they were hard to be located and harder to be hired. The children’s workshop generated further interest among the parents which led to another workshop for adults and numerous enquiries to hold similar calligraphy programmes in the future. “It has been a very satisfying experience rekindling ancient art’s appeal to new age practitioners. We aspire to work as a bridge between the society by introducing the experts to the audience as it is integral to the history and culture of our country”, quotes Dr. Anamika Pathak, the curator of the exhibition.

The show unveils all its vintage glory to the heritage lovers in India and from afar.

About the National Museum

The National Museum, New Delhi, as we see it today, has an interesting beginning. The blueprint for establishing the National Museum in Delhi was prepared by the Maurice Gwyer Committee in May 1946. An Exhibition of Indian Art, consisting of selected artefacts from various museums of India was organized by the Royal Academy, London with the cooperation of Government of India and Britain. The Exhibition went on display in the galleries of Burlington House, London during the winter months of 1947-48. It was decided to display the same collection in Delhi, before the return of exhibits to their respective museums. An exhibition was organized in the Rashtrapati Bhawan (President’s residence), New Delhi in 1949, which turned out to be a great success. This event proved responsible for the creation of the National Museum. The Museum presently holds approximately 2,00,000 objects of a diverse nature, both Indian as well as foreign, and its holdings cover a time span of more than five thousand years of Indian cultural heritage. The Museum continues to grow and serve as an epitome of national identity by collecting, reserving and sharing rich collections of historical, cultural and artistic significance. Museums are instrumental for education, cultural and spiritual evolution and make it possible for generations to experience and be inspired by them by perfectly capturing and reviving the beauty of human creative history.

The exhibition is running at the National Museum, New Delhi till 12 July.