On entering Nature Morte gallery at Neeti Bagh, one has a distinct feeling of having entered a self-contained space. Its white walls and black acrylic on white canvases part of Suhasini Kejriwal’s show “Eden” stand in stark contrast and harmony at the same time. The coolness of the whites promise a certain respite from the scorching heat on the roads of Delhi to the viewer but alas the canvases jolt the viewer back to what he has just left: the roads and pavements of our cities and being consumed by summertime lethargy. The conception of this range of paintings that provide a slice of urban life was developed over a period of four years as Kejriwal walked about the streets and by-lanes of cities and developed an archive of photographs and sketches of the people, animals, buildings, rubbish heap etc that constitute our urban landscape. In addition, she was influenced by the aesthetic imaginings of urban modernity complete with chaotic crowds and traffic. Kejriwal’s canvases are typical to her style of creating overcrowded and claustrophobic compositions. However, unlike her last presentation at Nature Morte in a group exhibition called “The Advertisement for Heaven and Hell”, it does not contain the surreal imagery and the psychedelic colours which populated her works then.

This solo exhibition has 18 paintings of various sizes, mostly acrylic on canvas except a mixed media diptych and a centrepiece sculpture titled Monument. Barring a few like Garden and The Thinker, most of the works are executed with black acrylic on white canvas, including the floor to ceiling Eden IV and Eden VI. Her treatment of the canvas has a certain quality due to which one instinctively knows if it is evening or afternoon in the scenes depicted. Individual paintings interact with each other in more than one way; human subjects and urbanscapes recur multiple times, be it the child in Eden and Garden or the sleeping girl in Afternoon and Eden and Eden IV; the background in both Garden and Life is a Dream constitutes an old building, a shattered Maruti 800 and pigeons picking at grains or in flight.

Suhasini Kejriwal, Eden VI (Detail), Acrylic on canvas, 349×228cm (137×90")
Two paintings of different dimensions bearing the same name Home depict how pavements are used as domestic spaces from different perspectives – one is a view from the pavement as the viewer looks out towards the road and the other is a view from the road onto the pavement. Often Kejriwal portrays the viewer as an outsider just like the painter who is being looked at by its subjects. For instance, the little girls in Eden IV and Eden VI stare out at the viewer, or the painter places herself with the subjects as in Self-Portrait, inserting the flaneur of the city as both an insider and an outsider. Her work is not only self-referential but her meticulous detailing reminds the viewer of a William Hogarth-like surveillance, as she seems to stalk a certain notorious looking man through Kolkata and Mumbai as seen in Eden IV, Eden VI and Afternoon. The idea explores the fact that people in the cities are constantly under CCTV surveillance.

Kejriwal’s city is also a space of multitudes and multiplicity; it contains the signs and symbols of industrial modernity, religion, and politics, the components of a modern man’s psyche and dilemmas. Just like the palimpsest of posters on electric boxes in her paintings, Kejriwal’s human subjects form the city and are simultaneously formed by it. The title Eden is therefore a compelling one because similar to the Biblical Eden, the animal and human share the same space on her canvases, and there is no conception of private and public. Each frame has someone sleeping or resting on the pavement, clothes hang from the fences as in Home, boys fight over football on the road as in Game, a group of school children laugh heartily as in Self-Portrait and even the most private of activities like thinking (Thinker) happens amidst urban waste. Amost every canvas is crowded by animals, dogs, crows, and pigeons existing in harmony with the citizens of the city.

However, all is not well in Eden. The buildings are dilapidated much like Kolkata where plants and creepers grow from within the cracks in the walls. The car is violently shattered in the Garden, while children are involved in unknown activities or are playing cards on the pavements as in Home and Afternoon. 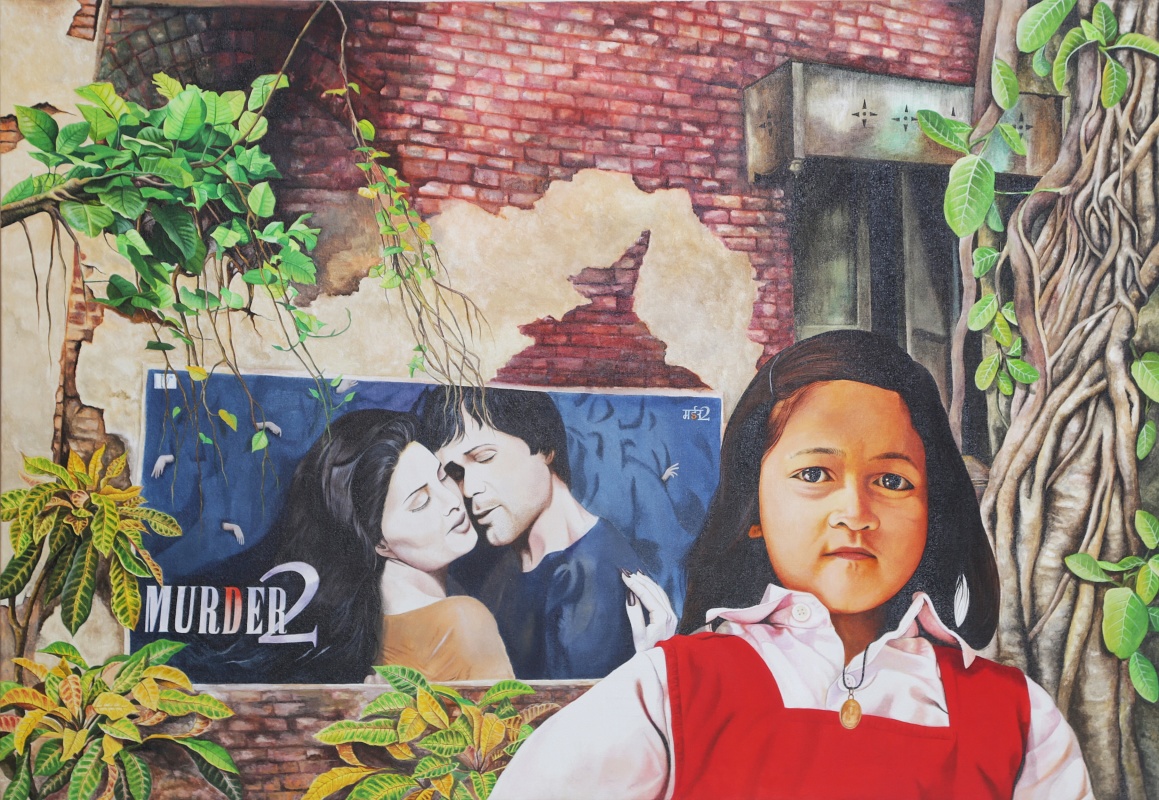 Suhasini Kejriwal, Untitled, Acrylic on canvas, 152×107cm (60×42")
The innocence of a child is marred by the sexual luridness of a poster of Murder 2 in Untitled, and cars create chaos and traffic on the roads of Kolkata and Mumbai in Eden IV and Eden VI respectively and the only flowers that are visible in the city are part of political graffiti. The Garden is made of concrete instead of flowers and there is a universal presence of urban waste. The latter is emphasised in the centrepiece Monument, a primordial pyramid, with bricks and urban waste in the lowest level, fruits and vegetables in the middle and plastic toys and buckets in the topmost rung. The toys and vegetables are not representative of innocence and health but constitute what will soon become a big heap of urban waste.

Is the city then a garden of “earthly” delight or a space riddled with urban waste under constant surveillance, or both? Kejriwal has left the question open for the viewer to conclude.

The show is on till April 26th, 2014 at Nature Morte, New Delhi. For more information visit the gallery website.