Rajasthan is literally the land of kings. Various parts of the region have been ruled by various Rajput clans for centuries. They were known not only for their fighting skills and valour but also for their patronage of arts and culture. Their prowess in architecture is well known considering the massive forts, palaces and temples that attract thousands of tourists every year. But Rajasthan also a infinite riches in terms of paintings. While it is a vast field and cannot be explored completely even in one life time, let us try to have a brief introduction of historical Rajasthani paintings.

It is believed that artisans from down south came and settle here many centuries ago. According to some experts, these were the descendants of the artists who created the immortal frescoes of Ajanta Caves. Their craft mixed with local traditions, techniques and folklore. The Rajput Arts of Rajasthan can be divided into several schools spread across different geographic and political regions of the state. They may look similar at first glance but a closer look displays various subtle differences between these schools. Also, the major schools are further divided into many smaller sub-schools. However, it is hard to say when exactly they started because the region has suffered numerous invasions and battles. Still extant examples are from sixteenth century or later.

The primary four schools are as follows: 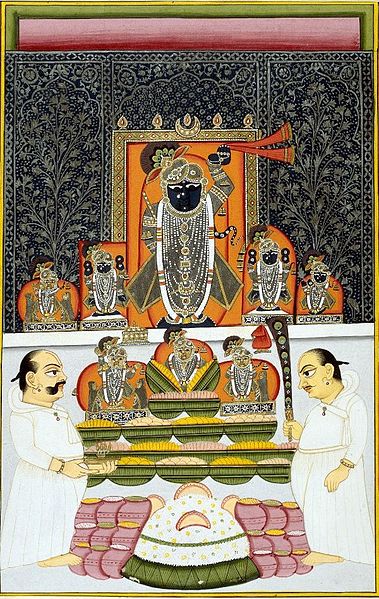 As mentioned already, Rajasthani paintings draw primarily from Hindu mythology, local folklore and royal history. The styles surely have been inspired by the pre-existing art forms of the subcontinent. However, we do see growing influence of newer culture with time. For example, the content of older Mewar paintings are pretty traditional. But in case of Bundi paintings that broke away from them post 15th century, we can see significant Mughal influence because politically also that Kingdom had developed an alliance with these newer powers. Similarly, in the 19th century arts we also see modern elements of the industrial era simply because they came into contact with the Europeans by that time owing to the company rule. 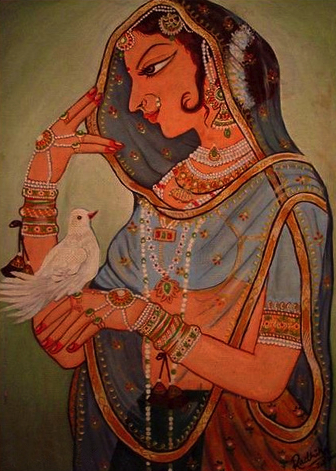 The most abundant imagery in these arts of all schools are probably those related to Lord Krishna. Both miniature paintings and wall frescoes are full with scenes of Krishna, Radha and Gopikas. Lord Shiva and his consorts are also quite prominently displayed. Other scenes include hunting and war scenes of the kings and also royal court scenes with queens, courtyards and general public. Also, different schools may have their distinctive features. For example in Kishangarh, you will find numerous female portraits called “Bani Thani”, which are based on a poetess and singer from the royal court of that Kingdom. Also, there are some paintings based on themes exclusive to Indian culture. For instance, the “Raagamala Paintings” are eclectic depictions of various “Ragas” from Indian classical music. These are probably the greatest examples of imagination and finesse of these arts where they managed to personify the notes of classical music and depict them as human beings amidst nature. Such Ragamala paintings can be found in all schools. It is also noteworthy that all these schools are very vibrant in depicting natural scenes, jungles, flowers, birds and animals etc. although most of the actual surroundings are pretty arid in the state.

One can surely find some example of such paintings in the museums or can also see them online. However, the best way to visit them is to visit the places where they originated and thrived. All the royal palaces and forts of Rajasthan will offer you glimses of these arts. For instance in Bundi’s royal palace there is a section called Chitrashala, a hall dedicated only to paintings. Entire walls and pillars here are covered with exquisite examples of Bundi art. Similarly in Jaisalmer Fort you will find a large painting depicting the love story of Dhola Maru, showing how local folklore were adapted by the artists. Bigger cities like Jaipur and Udaipur has far too many such examples to name. In short, historical Rajasthani Art still thrives in the land of its birth and the best way to experience the same in their own backyard.