Maharashtra is well known for its rock cut cave temples be it Ajanta, Ellora or the Elephanta caves which are a unique style of art and character of this region of India. One wonders how man who is at the most six foot tall, thought about and cut and chiseled those huge monolithic rocks and carved such exquisite pieces of sculpture, standing in front of which today we feel dwarfed. Added to this is the fact that there were no huge cranes, stone-cutters and even some form of electricity! The Elephanta caves are an evidence of the capability and endurance of the Indian artisans during the medieval period who worked under trying circumstances.

The Elephanta caves, declared as world heritage site under Unesco, are one such rock cut cave temple hewn from solid basalt rock. It is situated on an island about 7 kilometers away from the city of Mumbai, which is the business nerve center of India. As per Archaeological survey of India’s information provided at the site, not much is known about the history of these caves before the 4th c. A.D. when Pulakesin II of the Badami Kingdom defeated the Mauryan rulers of the Konkan dynasty and Elephanta came under their possession. Subsequently, the island was ruled over by various dynasties until it came under the Portugese rule and later on under the British. The caves are supposed to have been sculpted and worked upon during circa 6th 7th  century A.D. The original name of Elephanta was Gharapuri’ meaning the ‘city of priests’ or a fortress city. As with the other cave temples, this was also a Buddhist center and it is believed that the caves were constructed when there was a decline of Buddhism and revival of Brahminical traditions in India.

The name Elephanta was given by the Portuguese in the 16th century A.D. after a huge rock cut elephant with its baby perched on its back, which originally stood east to the Gharapuri village. It was shifted and now stands outside the museum in the zoological gardens at Byculla in Mumbai. During early colonial period, the group of islands which is now present day Mumbai was under Portuguese rule and these islands were given away as dowry to the British at the time of the wedding of the daughter of King John IV of Portugal in 1661, but the Elephanta islands were left out and remained as Portuguese outpost for some more time as it was of strategic importance.  Situated about 7 miles East of Mumbai’s Applo Bunder or Gateway of India, Elephanta caves is a Shaivite temple and it is a treasure trove of high relief sculptures spread over several panels depicting various scenes linked with the god Shiva like the marriage of Shiva and Parvati, Nataraja, Spearing of Andaka and Descend of Ganga and so on.

Elephanta caves have 7 caves, out of which cave no.1 is the most important and contains majority of the panels while cave no.6 and 7 are the furthermost and not very frequented by visitors. Many Buddhist stupas can be seen around Cave no.7.Although cave no.2 and 5 are unfinished, yet they give us an idea of the planning and structural construction of these exquisite caves. Cave 3 is a large cave complex with huge cushion capital  pillars. The door panel leading to the recesses inside is richly carved, but due to extensive damage, they cannot be deciphered properly.

The Elephanta caves can be approached from the north leading to Cave no.1 and the Mahadeva Image. The main cave is a large excavation being almost 130 feet in square, supported by rows of massive pillars, which have a square base, fluted shafts and a cushion capital. There are three large square recesses each of them bearing huge dwarapalas. It appears that the pillars have been made huge to support the rock. There are two other entrances from the East and the West, both leading to the courtyards of subsidiary shrines.

As one enters from the northern side, there are sculpted panels on the left and right side depicting Shiva as the Lord of yogis and Shiva as Nataraja respectively. In the panel on the left, Shiva is shown seated on a lotus in a yogic pose. Although the figure is badly damaged, the face of the image expresses calm and serenity. In this panel, celestial gods and goddesses, Brahma, Indra, and Lord Vishnu have also been sculpted.

The panel on the right that of Nataraja is better preserved, but the lower portion of the sculpture is completely missing. Shiva’s right arm although broken is stretched across the chest in a characteristic mudra. The whole sculpture exudes vitality. The other figures are Parvathi, Vishnu on Garuda, Indra on Iravati, Lord Kumara, Ganesha and Brahma.

In the cave proper, the huge image of Maheshamurthi which is almost 18 feet high occupies the centre. This unique sculpture of Shiva showcases three different manifestations of Shiva that of creator, destroyer and preserver. The central face is calm, and rows of necklaces adorn his chest. The face of Bhairava, to our left, is always in shadow showcasing death and time. The forehead is protruding, mouth cruel with a twirling mustache and symbols of death like skull and snake adorn his hair. The third face represents the feminine aspect of creation. The hand holds a lotus and the hair are decorated with pearls and fresh flowers. The other panels represent the descent of Ganga and Shiva as the Ardhanarishwara. Shiva is shown leaning against the bull Nandi, his upper hands holding a snake and a mirror. The other gods such as Brahma, Vishnu, Kumara, Varuna have also been depicted. The panel showing the descent of the Ganga is well executed, showing Shiva at the very moment of receiving the impact of the mighty river. Shiva’s body is slightly tilted with the weight of the river, with Parvati turning her face away. The figure of Bhagirata kneels at his feet. The whole panel is a very poetic representation showing movement, rhythm and lyric.

Yet another panel shows Shiva as the destroyer of demon Andhaka. Despite the fact that the image of Shiva is badly damaged in this panel also, one can notice the fierce form of Shiva with his teeth bared, hair adorned with skull and bulging eyes.

The panel of Shiva’s marriage is full of lyrical charm. Shiva is shown supporting Parvati who is to the right signifying that the wedding has not yet taken place. Parvati is shy with downcast eyes. The other gods and goddesses have also been depicted. 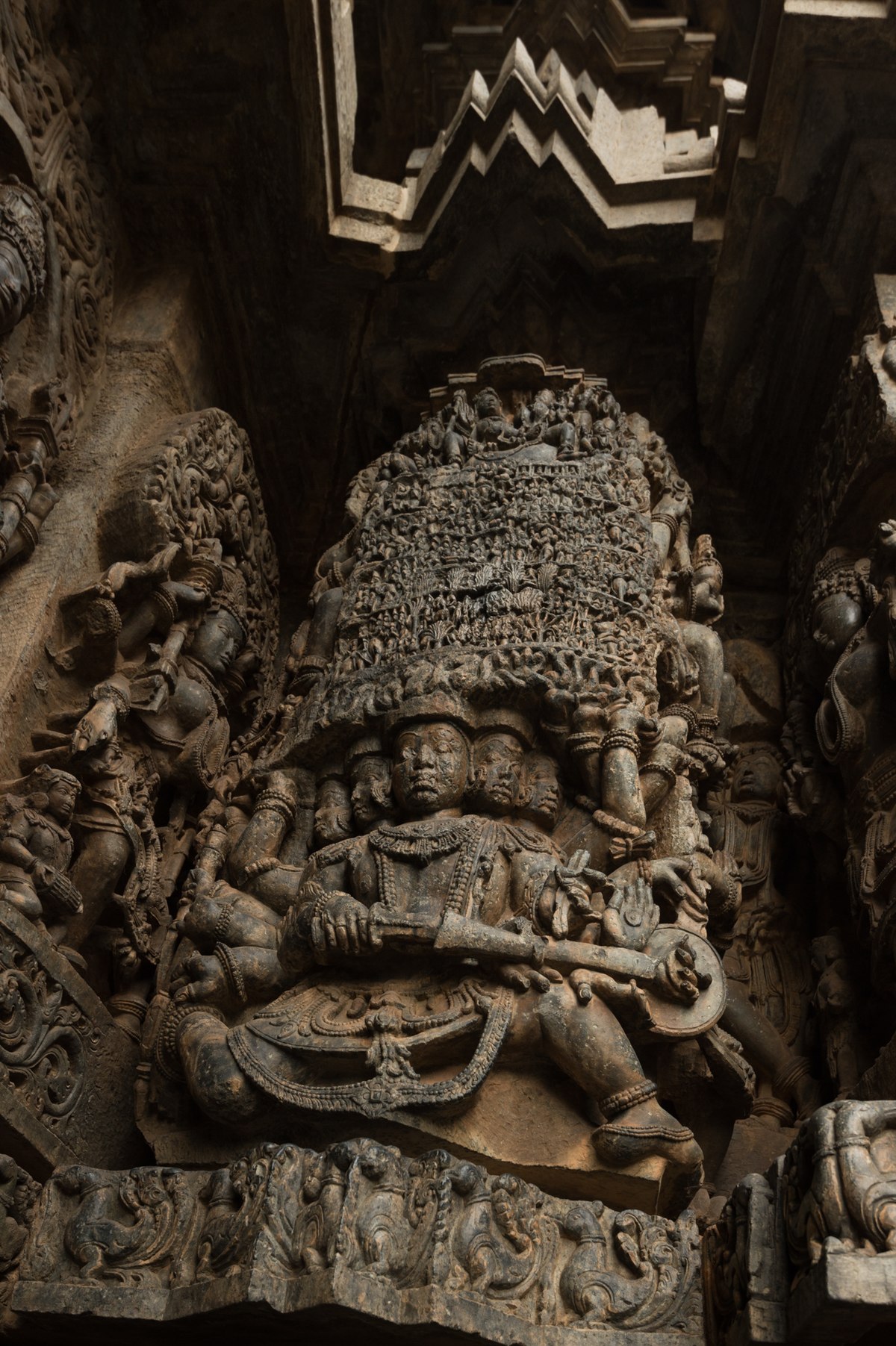 On the Eastern side, there are panels depicting the demon king Ravana uprooting mount Kailasa, a panel showing a scene in Mount Kailasha with the entire family of lord Shiva and there are also recesses with the image of saptamatrikas. These images are quite damaged. Some traces of the paintings which adorned the ceiling of the walls can also be seen. There is a Shiva shrine in cave no.4 as we walk back, with a lingam in the sanctum and two sculpted images of lions at the entrance. The dwarapala figures at the entrance are huge and sculpted to perfection.

If we walk further up, there are two cannons kept on the top which was perhaps used by the Portugese. The Elephanta caves also houses a museum.The island on which the caves are can be reached by a launch from Gateway of India. The ferry drops you on the island from where one has to walk a about a kilometers to reach the flight of stairs leading to the caves. There is also a small train which takes one near the flight of stairs.

As American literary Harold Bloom stated, “Originality must compound with inheritance.” Our rich heritage, of which the Elephanta Caves are an integral link, are indeed much source of artistic inspiration even after centuries.