Human history has been a steady trajectory of the constant struggle to know more. It is indeed this seemingly insatiable thirst for knowledge that has brought us from cave paintings to an age where information is available is at the tips of our fingers and travels at the speed of light! 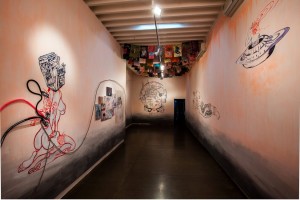 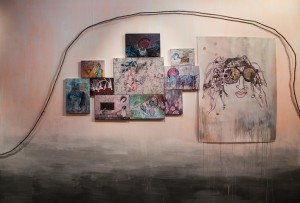 We have studied numbers and equations, metals and chemicals, we’ve decoded the laws that govern our physical world; we’ve employed science to try and understand the way things work, and yet, some things continue to evade us. These, we’ve explained with the help of myths, and like parallel lines that never meet, science and mythology can’t converge.

Chitra Ganesh has sought to challenge that notion with her solo show at Lakeeren Art Gallery, Mumbai. Drawings From The Present is a unique site-specific installation where Ganesh has deconstructed those parallel lines, redrawn them as tangential ones and captured that single point where science and mythology may intersect. 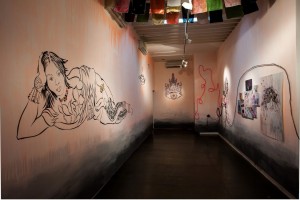 A large mural of the iconic Rajabhai Tower – contained within a human eye, greets me as I enter. The hands of the clocks are conspicuous by their absence, and this is my first clue that in this space, time is no longer linear, but a blurry circle – a place where the beginning and the end are the same. The remaining walls of the gallery are adorned with her trademark drawings of women. The space within the tiny gallery seems to expand as you observe her larger-than-life women, painted against light walls. They recline in grandeur, their body language communicating a comfort, an ease, with themselves and with the space they occupy. Donning outlandish headdresses and whimsical, mirrored garments, each woman could be a goddess or a mad scientist, thus making It difficult to box these women into any known categories – perhaps precisely what Ganesh wanted to achieve.

As I stand in the center of this space, I become of aware of my participation in her work. I am a viewer and the viewed, consumed by the multitudes of eyes innocently staring down at me from the ceiling. I see parts of myself in parts of her women, reflecting in the pieces of mirrors glued onto limbs and eyes. Scale is distorted. Normal is the world she has created here, and I try to locate myself within it. There is a deep sense of personal engagement with her murals, the viewer is reflected in it – literally and metaphorically – as opposed to just being a consumer. However, there is none of the brashness that might be expected. Ganesh’s eyes are merely gazing, they do not probe and they do not confront. 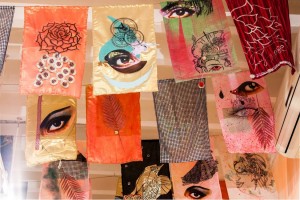 The most captivating work is her modern reinterpretation of a courtesan from the 18th century. She occupies the wall, lounging, dripping with jewels and of course, the fragments of mirrors. She serenely views the viewer, who gazes up at her in turn. There is a mutual exchange here, not the consumption of one by the other.

In a departure for the gallery, Ganesh created this work while living out of it. She camped at the gallery for a few weeks, prior to the shows opening, surrounded by bits and bobs, painstakingly collected by the artist, all culminating in this sci-fi landscape which effortlessly floats in and out of the realm of mythology and thus arriving at what can only be described as a ‘contemporary mythology’. 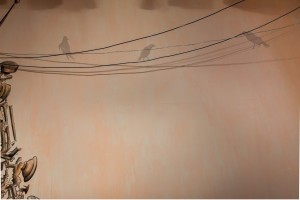 Employing deconstruction, Ganesh has broken down mythology into disparate elements, and put them back together with an undercurrent of science fiction. This is evident in the style she has employed, with her drawings reminiscent of Manga and Steampunk among other things. Living within the gallery space and waking up to views of the city everyday has also influence her work. The imagery draws elements from architecture in the city and in the case of the gallery, flows directly with it. 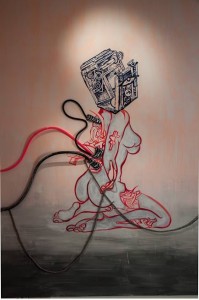 “What we call the beginning is often the end. And to make an end is to make a beginning.” These words by T.S Elliot echo in my mind, as I leave the gallery. With Drawings From The Present Ganesh has managed to carve out a tiny space, a niche of his own, in a city that’s always rushing and where time is a precious commodity, where time loses linearity, thus opening up with endless beginnings.