As Hippocrates, the Greek physician and philosopher had stated Ars longa vita brevis  or ‘Art is long and life is brief’, we discuss some rare and historic works of art.

The prolific English painter and sculptor Frederic Leighton created his famous Flaming June as one of six paintings for the summer exhibition of 1895. And it has been displayed for the first time since 1930 from 4 November 2016 to 2 April 2017 at the artist’s former home and studio in west London. The painting features “a red-headed woman slumbering in a sheer orange dress” and has been acquired from the Museo de Arte de Ponce in Puerto Rico.

Leighton House’s senior curator, Daniel Robbins has painstakingly brought together five of the six works from the artist’s original exhibition scattered amongst private collectors since the 19th century and these include “Flaming June (1895) and Lachrymae (1895), from the Metropolitan Museum of Art in New York; and Twixt Hope and Fear, The Maid with the Golden Hair and Candida (all around 1894-95), whilst the sixth piece, A Study, or Listener, was the painting that Leighton sent to the Royal Academy in place of Candida, and that has not been traced,” according to reliable sources.

Robbins says, “The endeavour has been undertaken to reveal the context behind Flaming June’s creation and only gradual rise to fame. Preparatory drawings from the museum’s collection and the Royal Academy illustrate the methodical process by which Leighton refined the figure’s circular pose and developed the composition over a number of years, while wall texts recount its unpromising reception and provenance.”

Alejandra Peña, Director of Museo de Arte de Ponce in Puerto Rico commented that, “The star exhibit is allowed to travel “rarely and only in extraordinary circumstances. The painting previously appeared in London at Tate Britain in 2008 and at the Frick Collection in New York last summer. This project is clearly a once-in-a-lifetime opportunity, and our museum is happy to collaborate with Leighton House to organise exhibitions in London and in Ponce that will surely heighten Leighton’s standing and international reputation.” 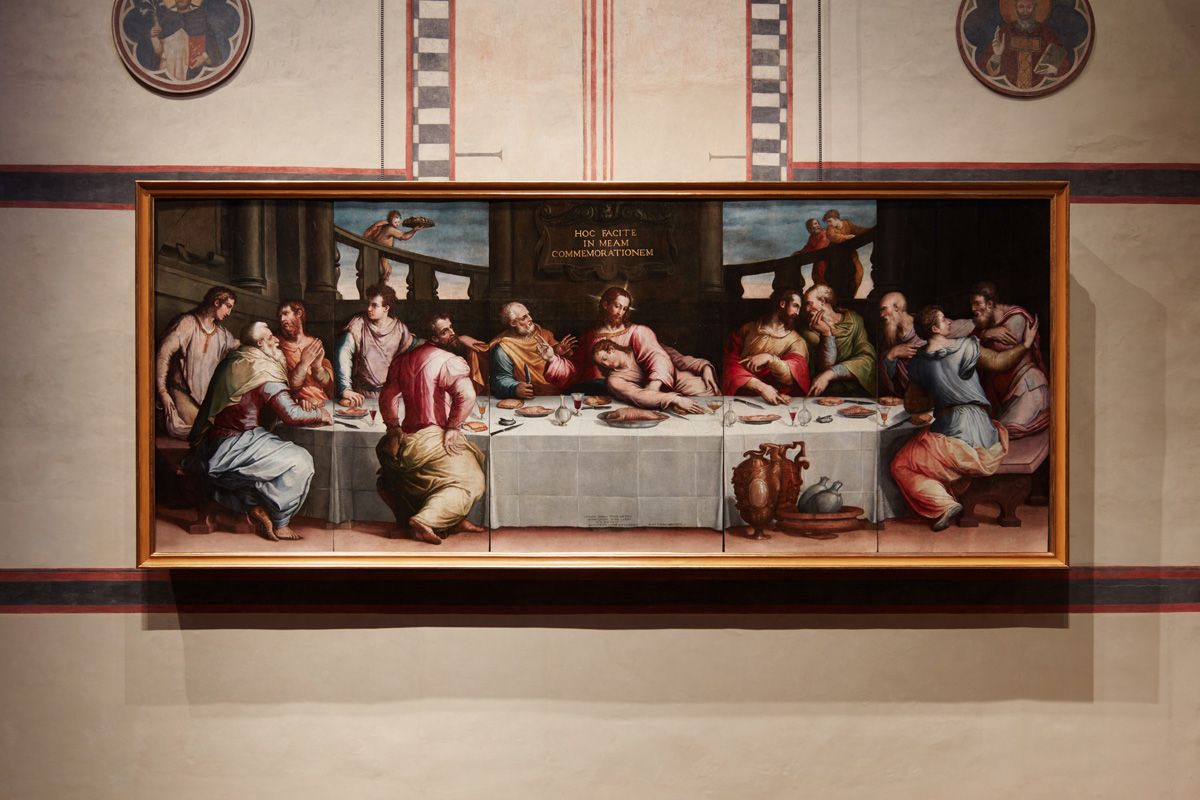 Meanwhile, in Italy, on the same evening, the Italian president Sergio Mattarella graced the unveiling of Giorgio Vasari’s newly restored Last Supper (1543), the five-panel, 8ft by 12ft painting. Stored in the Museo dell’Opera di Santa Croce, the historic work of art had been submerged in polluted water for 12 hours when the Arno River had been flooded on 4 November 1966. And the unveiling of the restored masterpiece at the refectory of the Basilica di Santa Croce was timed to coincide with the 50th anniversary of the flood wherein thousands of the city’s erstwhile art treasures had been lost.

The restoration work was undertaken by Florence’s renowned Opificio delle Pietre Dure e Laboratori di Restauro (OPD). Marco Ciatti, head of the OPD’s panel paintings department and now the organisation’s soprintendente, in an interview in 2010 had described the extent of damage to the Last Supper as “terrible”, calling it “one of the worst cases in conservation history”. And at the restoration unveiling, he praised and thanked all those involved in the “restoration and conservation project”, which was supported by the Italian fashion house Prada, Italy’s National Civil Protection unit and the Getty Foundation. According to other reports, restorers were reluctant to even touch The Last Supper for decades owing to the extensive damage in which, the gesso, a type of glue that held the paint to the wood panels, had sagged during the flood, while the panels cracked and curved after they dried. And thus, it had been kept in storage, laid horizontally because of its fragility.

Marco stated, “The painting was also covered with a thin crust of dried paper. Volunteer conservators who rushed to save works of art after the 1966 flood had attached conservation paper to keep the paint from sagging off the wet wood. When they ran out of conservation paper, they used tissue paper and Kleenex. When a new team of conservators undertook the project in 2009, they X-rayed the work to understand where the cracks were. Originally, they feared they would have to separate the painting from the panel and reapply it to a new layer of wood.

But after the conservators began to carefully peel the paper away from the painting’s surface, using tweezers, they found the work in better condition than they expected. They managed to reattach the original gesso using surgical needles. Now, the restored work gives art historians a new window into Vasari’s artistry.

When we saw the painting standing, it was like someone who had risen from their sickbed after being very ill. Overcoming a challenge that was considered impossible and handing this work back to Florence was very emotional.”

Reportedly, as part of elaborate and state-of-the-art security measures built to safeguard the precious work of art with Biblical references, “the painting can now be raised by hand in the event of a flood warning by means of an elaborate system of counterweights.”